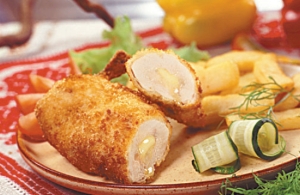 Although it's unknown exactly how Chicken Kiev has made it onto the menu of every self-respecting Russian restaurant from Brighton Beach to Sydney, this simple yet tasty combination of chicken breast, herbs and lots of butter has been the worldwide standard bearer for Russian cuisine for most of the 20th century.

Despite its name, the origins of this dish are hotly disputed. Russia, of course, claims it for its own. Ukrainians, too, for obvious reasons, consider it their national dish. The most likely evidence, however, points to France, which has spawned more than one "Russian" dish in its culinary history. In the 18th century, say food historians, French cuisine was so popular in St Petersburg that the Empress Elizabeth would send scores of chefs to study in Paris. One of them returned with a recipe for Cotelettes de Volaille, a dish not unlike Chicken Kiev.

It would be a revolution and two World Wars later that the cutlets would finally acquire their famous name, when they were served in Kiev, to honour a Ukrainian delegation returning from Berlin in 1947.

Combine the softened butter with parsley, garlic, chives, 1 teaspoon pepper, and 1 teaspoon salt. Divide into 6 portions and chill until firm.

Remove fat from chicken breasts. Place each chicken breast half between 2 pieces of waxed paper and pound to about 1/4 inch thickness or less, using a mallet.

Place a portion of the chilled butter mixture in the centre of each chicken breast half. Roll each to completely enclose the butter, and fasten with a toothpick.

Mix bread crumbs with rest of salt and pepper and place to the side.

Place flour to the side as well.

In a shallow bowl, mix eggs with water and beat until fluffy.

In a medium size deep frying pan, heat vegetable oil to medium-high. Fry chicken for about 5 minutes then turn over and fry for 5 minutes longer or until the chicken is golden brown.