Crisis of power or power of crisis? 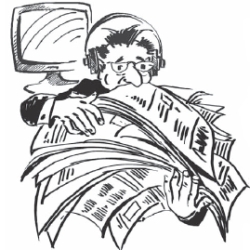 The first weeks of March were dominated by the effects of the financial crisis as the Russian press struggled to gain a footing in how all the recent changes would affect the economic, political and social landscape. Another central topic was the first year of Dmitry Medvedev's presidency, and, indirectly set against the backdrop of the crisis, the new trial of Mikhail Khodorkovsky.

The issue for almost all Russian newspapers was how the economic crisis was affecting all aspects of politics and society. Besides thematic articles, Russian newspapers used it as an angle in many other news stories. But the crisis as a central theme featured most heavily in the tabloids, which sought a human element.

The Moskovsky Komsomolets tabloid featured a front-page story on Friday, March 13, titled, "The crisis is like a knife in the heart". It profiled a provincial railway worker and father of five who killed himself when he lost the job. His story was compared to the suicide of the German businessman Adolf Merckle. "The fates of these people are different. The motive for their decisions to end their lives is the same," said the paper.

Another story on the front page examined how the Interior Ministry was preparing for potential anti-crisis rallies and protests. Novyie Izvestia on March 11 looked at how hundreds of thousands of convicted inmates had ended up without jobs. The RBC Daily, a business newspaper, by contrast examined in a front page article on March 11 how out-of-control debt could affect the financial security of the nation.

Russian newspapers gave heavy coverage to President Dmitry Medvedev's first year. It contrasted starkly with the Western media's belief that there is growing tension between Medvedev and Prime Minister Vladimir Putin. In fact, some Russian papers tried to dispel what they called an exaggerated and at times inaccurate view that the tension exists.

While there was a consensus in the Russian media, which echoed opinion polls, that Putin still had a greater deal of influence within the "power tandem" he shared with Medvedev, analysts looked for clues about the nature of that tandem. This signified that the real relations between Medvedev and Putin remain a mystery.

Few articles ventured to suggest a rift between Putin and Medvedev, though many took the view that both leaders were losing clout as a result of the crisis. The Nezavisimaya Gazeta daily, a moderately oppositionist central newspaper, featured a front-page story on March 2 titled: "A still weak president, a weakening prime minister and the growing entropy of Russian society". The writer, Konstantin Remchukov, portrayed Medvedev as a politician who lacks decisive vision.

Without speculating too much on the relationship between Putin and Medvedev, Remchukov describes the weaknesses of each leader's handling of the crisis.

Another Nezavisimaya Gazeta article tackles the tandem issue more directly: "Unequal marriage", a March 3 article by Carnegie analyst Nikolai Petrov, claimed that there is no tandem, because the two are not independent equals - Medvedev and Putin, Petrov wrote, are more like Siamese twins.

There can be no rift between the two leaders because popularity ratings of both are connected - one cannot go down without the other.

In fact, the political system depends on their ratings rather than on the institutions which they have created.

The tabloid Moskovsky Komsomolets, meanwhile, tackled the issue via a group of analysts. In the main interview of the article, Kremlin adviser Gleb Pavlovsky said that the likelihood that the current political system might not survive the crisis was "1 in 9". He later opined that the Medvedev-Putin tandem needed to be better underlined for the masses.

The start of the second trial of former Yukos chief Mikhail Khodorkovsky has had less coverage in the Russian press than abroad, largely because the start of the trial on March 3 involved closed preliminary hearings and journalists had to rely on information given to them be the defence. As a consequence, Russian dailies documented the various motions filed by the defence. These included pleas to dismiss the prosecutors and the judge (who had been requested to preside over the court by the prosecution), the questioning of the jurisdiction of the court, and even a plea to call Finance Minister Alexei Kudrin as a witness.

There was little indication of how exactly the trial would play out.

Another reason may be the weariness after the heavy coverage of Khodorkovsky's first trial, which ended in 2006. The increasingly pro-Kremlin Izvestia daily, a leading central newspaper, came out with an article on March 4 titled, "Khodorkovsky, again!" The article described how the hearings were closed and wrote about the heavy police presence outside of the courthouse. Otherwise, the story did not take a particular slant on the issue.

One of the few newspapers that featured Khodorkovsky on their front page was the centrist Vremya Novostei daily, with an article tellingly titled, "In the second circle". The article itself focused heavily on the news aspect, but mentioned that Khodorkovsky's supporters were unable to hold a protest outside the courthouse, although they had been able to do so five years ago. "This time, Moscow authorities did not allow the rallies. Nevertheless, there were attempts to hold meetings about 100 metres from the courthouse."

A column in the centrist Novyie Izvestia, meanwhile, was sympathetic to Khodorkovsky, with the author saying the convicted former oligarch still had the "moral upper hand".

A front page announcement in the Kommersant business daily on March 2 reflected the bemusement common for many papers that wrote about Hillary Clinton's mistranslation of the "reset button" during her meeting with Sergei Lavrov. The headline of the page 2 story read, "Sergei Lavrov and Hillary Clinton have loaded the agenda", using a word that played on the "reset" or "reload".

But other than the puns in the headline, which are typical for Kommersant, the article itself focused on the real agenda in US Russia relations rather than on the button incident. Meanwhile, the conservative Izvestia columnist Maxim Sokolov opined on diplomatic language, pointing to a number of similar gaffes in the Soviet era that have hardly had a chance to impact policy.