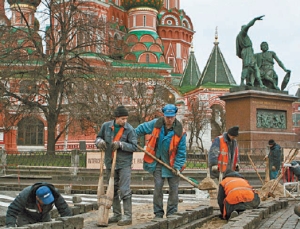 As the recession worsens, more migrant workers in Russia will suffer from the inevitable mass job cuts. As foreigners, they are particularly vulnerable since virtually no law exists to protect them against unfair layoffs.

With its 12m guest workers, Russia has the world's second largest migrant population after the US, and the demand for low-skilled labour in Russia's big cities, especially Moscow, until recently was on the rise. Last year, Russia's migrant workers sent about $11.4bn in remittances to their families back home.

Now the system is breaking down. Even in better times, employers never cared much about migrants, paying them little, lodging them in cellars or encampments and taking away their passports. Today, the economic crisis has forced out these street sweepers, loaders and car washers. And now, in Yekaterinburg, Tajik workers have refused to continue construction of a high-rise apartment block until get their back wages.

"This strike might trigger further mass protests among other CIS migrants working in Russia," predicts Andrey Vetluzhskikh, chairman of the Trade Union Federation in the Sverdlovsk Region.

What will happen to the laid-off migrants then? According to Russian law, their have to leave Russia within 10 days of their contract being terminated. Yet it is unlikely they will swarm back to their homeland, since there are no jobs there. Several million migrant workers on the streets present a major threat to social stability. IMF and World Bank experts warn that for emerging economies such as Russia, the economic crisis may mean not only loss of purchasing power, mass layoffs and wage cuts, but also widespread social unrest sparked by jobless migrants.

From a different angle, however, the situation looks less dramatic. The large construction industry employs about 1m workers, and about as many work on small construction sites. More than 1m migrants hold legal jobs in big retail chains, and many are engaged in the housing and utilities sector, which still has quite a few job vacancies to fill. Additionally, the farming industry is always in want of labour.

Consequently, these 12m people are not confined to a single industry in risk of mass unemployment, but have the option to work in various sectors of the economy.

True, many of them will be laid off and will not be able to find another job. But all these people legally entered the country, got legal jobs and received the official registration that must be renewed periodically.

Why would they suddenly take to the streets or start robbing locals? Most of them are neither outcasts nor madmen; they are just ordinary people like us. The migrant unemployment issue has no easy solution. The only real question is whether a tougher migration policy is beneficial or detrimental for the economy.