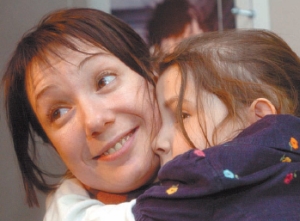 Chulpan Khamatova with her daughter Alina

The only way to resolve the problem of people's lack of trust in the Russian foundations that raise money for the poor (see above) is by telling them about specific individuals who are trusted and respected - individuals such as actress Chulpan Khamatova.

Though only 32, Khamatova is already one of the most talented and sought-after film and stage actresses working in Russia today. At Moscow's popular Sovremennik, many theatre-goers come especially to see Khamatova, while her films are usually major events.

Khamatova first became involved in charity work several years ago. The deputy director of the Children's Hematology, Cancer, and Immunology Centre appealed to her for help. The centre's small leukemia patients were in urgent need of a new machine to irradiate donors' blood. Khamatova and other actors from the Sovremennik staged two benefit performances, and raised the money.

At that point Khamatova might have decided she had done enough and moved on. But, she says: "I had already fallen in love with those people." That is how Grant Life, a foundation to help children with cancer and other life-threatening illnesses, came into being. Today it is one of Russia's most successful fundraising operations. Last year Grant Life raised nearly $7m, 57pc of which came from individuals.

Everyone trusts Khamatova. At the end of her theatre performances, spectators sometimes give her bouquets into which are slipped envelopes with money and a short note: "For the children." No one doubts all of that money will go to charity. This level of trust is because the foundation's accounting has always been entirely transparent.

Why did you organise the foundation?

We categorically did not want to organise a foundation. We were afraid. There was no trust in the idea of a "foundation". But life forced us to do it. I want to tell you about the people who work for our foundation. They are true quiet knights: 45 of them. Doctors and ordinary people who are responsible for the blood and who work with the children's parents. There are also 250 volunteers, young people who come to be with the children. There are also several psychologists. The children have to be brought together, and celebrations organised. Directors, actors, football players and hockey players all come to the hospital to cheer the children and their parents. My life is completely intertwined with this. I put on a performance and doctors and bankers come to it. Friends and colleagues know about the foundation and suggest ideas.

You are an actress very much in demand both in the theatre and in film. You also put on festivals. You have two daughters as well as nephews whom you support. And the foundation... Where does the energy come from?

From the doctors and the children. And from the realisation that my work may cure a child or may help doctors who can help a child... This is an integral part of my life. Forever. I have many children to whom I am closer than I might like to be. But it can't be otherwise. And without that closeness nothing would work. Those children are my family. Not long ago a boy came up to me and said: "Hi, this is my girlfriend!" Last year we raised money for him. And here he is so good-looking, with a girlfriend. Things like that make up for all the difficulties.

If you wish to help, please donate: