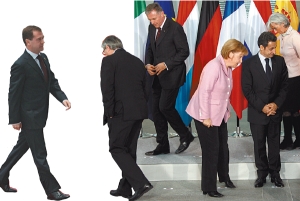 The Russian authorities have done their homework in preparing for April's G20 London summit. Two weeks ahead of the summit, they unveiled a proposal for reforming the world financial system. By putting it up for general discussion, the Kremlin sends the message that it will openly promote its plans.

The documents Russia will submit to the G20 contain eight main theses, preceded by an introduction and a list of the main areas in which the world financial system needs reformation.

Russia proposes to renounce the standard approach to problems and urges the G20 member countries to act more resolutely. It proposes, in the wake of the April summit, to call an international follow-up conference. Although the conference venue is not named, most probably the Russian officials will insist on Moscow or St Petersburg, as hosting such a conference would boost Russia's world status. In Russia's opinion, the world system needs the greatest reform in the strengthening of the legitimacy of international institutions (notably the IMF and the World Bank), the creation of a system of reserve currencies and financial centres, a new system of market management and a system of incentives encouraging the rational behaviour of investors in financial markets.

Russia's first thesis, regulating macroeconomic and budgetary policies, is sure to provoke controversy and has little chance of being adopted in the form proposed by the Kremlin. In the first place, it is necessary to work out international standards of said policies. If the EU's record of compliance in times of crisis with the Maastricht Treaty is anything to go by, such agreements are not worth very much. The Maastricht accords set down the main principles of macroeconomic policy in the euro zone. However, due to the crisis most of the big EU countries will exceed the Treaty's cap on budget deficit. The European bureaucrats have already declared that they will not punish the countries which violate that provision.

The Kremlin's second thesis deals with stimulating domestic demand and reducing the impact of financial institutions on the economic cycle. The regulators of large economies should limit short sales and marginal stock exchange deals. Russia and some other countries already did this when the crisis hit the money markets in 2008.

The third thesis is interesting: the Kremlin proposes an international agreement on universal standards of regulation and supervision in the financial sector (dubbed Standard Universal Regulatory Framework, or SURF). In the opinion of the document's authors, it should prevent situations when poor regulation in one country makes other countries suffer (as happened during the current crisis, caused mainly by the meltdown of the US mortgage market).

The fourth thesis is intriguing, as it contains Russia's pet idea of setting prices in several currencies, not just in dollars and euros. The authors argue that the world system can follow one of two paths: to expand the list of reserve currencies and stimulate the creation of regional financial centres or to create a new supranational reserve currency which will be issued by global financial institutions. The first variant has the support of many developing countries which would like to see their currencies on the list of reserve currencies. However, the global crisis has shown that, with the risks as high as they are today, investors are not yet ready to invest in developing currencies. Instead, they prefer the dollar and the euro, dismissing the rouble, Latvian lat, Polish zloty, Ukrainian hryvnia and many other currencies once deemed fairly strong.

Russia is not alone in thinking about the creation of a world "super currency". Back in February the president of Kazakhstan, Nursultan Nazarbayev, spoke of the need to introduce a supranational currency to ensure "world self-growing wealth based on a perfect world currency".

Such a fundamental change of the world financial system would necessitate changes of the International Monetary Fund, which is Russia's fifth thesis. The sixth thesis is increasing aid to the poor and developing countries through development financing, and the seventh is enhancing the financial literacy of the public. These three theses merit only a passing mention as they are neither radically new nor exceptional. The same is true of the final thesis: energy efficiency, part of which addresses the need to seek trust between producers, consumers and transit countries of energy.

The Russian proposals are a mix of commonplace ideas, which are good only in theory, and genuinely novel theses reflecting not only Russia's position, but that of many developing countries. Claiming the position of the champion of other countries' interests is important: if the formation of many reserve currencies and regional financial centres does come to pass, Russia must do its best to establish its sphere of influence. As Asia has China and Japan; the West, the European Union; so, Russia probably intends the former Soviet republics for their sphere.

This article was first published in Lenta.ru online magazine