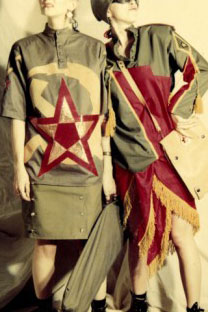 Photo by I. Afonina

The annual Fashion and Style in Photography festival is on in Moscow: 28 separate exhibitions around the city, including "Hooligans of the `80s".

You wouldn't think this show was anything special: black and white photographs of Soviet-era girls and boys in leather jackets with metal studs and punk hairdos.

Sartorial non-conformists, these kids were seen both by ordinary people and the police as "hooligans". These shots have an everyday air about them: at home in the kitchen, in the park on a bench. They were taken not by professionals, but by the "hooligans" themselves - in 1982 (under Brezhnev), 1983 (Andropov) and 1985 (Gorbachev). They thought these pictures were just for them. But they turned out to be for posterity. To young people today, the 1980s seem like the merriest and most romantic period of recent Russian history. Although what was merry about it? No food in the stores, lines to buy furniture and appliances that were years' long. Owning a car was for most people an impossible dream, a reality for the select few. At the same time, there was already something in the air, an imperceptible sense of impending change - everything was still forbidden, yet certain things you could get away with. In 1985 came Gorbachev's announcement of perestroika and glasnost; in 1991 the Soviet Union collapsed. And the first people to sense this coming were these silly girls and boys in biker jackets and absurd mohawks.

Only later would they be called "fighters against the regime" and "opponents of the Soviet system". In fact, they weren't fighters at all. None of these kids ever appeared on Red Square with placards calling for the withdrawal of Soviet troops from Afghanistan or the release of Soviet dissident Andrei Sakharov. Politics didn't interest them. They simply wanted to stand out from the grey crowd, to be not like everyone else. That desire represented a danger to Soviet ideology. The Soviet regime always felt threatened by the individual who wanted to "step out of line" - in whatever way. You can see why: if one person could do it, then so everyone. And then who would march in the parades and sing the national anthem?

Today you could walk around Moscow in a costume of peacock feathers and excite scarcely a curious glance. In the `80s, however, any unusual clothing not only shocked passersby but could cause them to call the police. So it took real courage to go outside in a biker jacket and punk paraphernalia. You wouldn't be sent to prison - times had changed - but you might easily be expelled from school or college for "undignified behavior incompatible with the appearance of a Soviet person". After that you could become only a yard-keeper or a stoker. No wonder those two professions were so popular among underground artists of the Soviet era.

To become a genuine Soviet punk or stilyaga, you needed not only courage but a remarkable creative imagination. How else could you piece together a fashionable costume when the stores were empty? You had to sew your dress or pants out of curtains or even mattress covers (red-and-blue striped). Sneakers had to be bleached (white sneakers were the fashion, but the stores had only black). Jeans too were boiled with bleach to give them the necessary streaks. Leather jackets - sewn by savvy underground tailors from whatever scraps they could find - were decorated with different-colored bits of wire pulled out of radios. Many of these non-conformist fashionmongers went on to become perfectly official clothes designers. Indeed, many of the "hooligans of the `80s" have done very well in post-Soviet society. The average age of Russia's millionaires and billionaires is around 40 - give or take. The `80s was their time, their youth. Or perhaps it was all just a happy coincidence: their refusal to adhere to Soviet standards afforded them the chance to create another reality.

We are in the midst of another interesting time right now. It's clear that a lot will change - not just in a given country, but the world over. So look around you: has anyone you know taken to "bleaching sneakers" or "boiling jeans". That is, making something unusual out of usual things. Perhaps that person is already feeling about for something new, for his own path that will lead him to a different post-crisis reality. We'll know in about twenty years.