The charge of the youth brigades 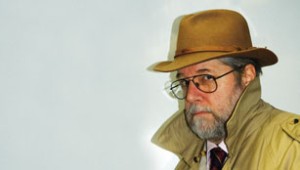 One of the most striking images from the photo-op-rich G20 summit last week was an informal shot of presidents Barack Obama and Dmitry Medvedev standing together as Silvio Berlusconi, perched just behind, mugs for the camera while hovering between them. When this triptych came up on the world's TV screens, millions of Russians and Americans who beheld their presidents side by side for the first time might've been forgiven a certain marvelling at the obvious, as in, "Wow, they really are different colours"; "Is Obama standing on a phone book?"; and "Who's the dork in the middle?"

What's most noteworthy about Obama and Medvedev is not their differences in hue and height, however, it's their singular commonality: these two presidents are juvenility-enhanced, crow's-feet-challenged, non-prune-eating - yes, they're conspicuously young.

Granted, both men can technically be described as middle-aged lawyers. But let's face it, these gents fairly radiate a youthfulness that belies their respective 47 and 43 years, and both live lives that incorporate youth culture as their predecessors' never did. Vladimir Putin didn't surf the Internet, keep a personal web site or fire up Deep Purple on his iPod to chill out; and George W. Bush, though skilled at ducking incoming footwear, didn't know a BlackBerry from a raspberry.

That a new Pepsi Generation is in power in both countries was further emphasised by the two presidents' separate decisions to do exactly the same thing outside the summit proper: go meet college students. Medvedev was a big hit at the London School of Economics and Political Science, drawing applause and laughter from sceptical young Brits as he fluidly answered substantive questions and jauntily donned a school cap for photos. Mikhail Gorbachev wasn't this smooth when he charmed the socks off Margaret Thatcher.

If Dima aced his meet-the-smart-kids test, Barry was utterly in his element at a town meeting with French and German undergrads in Strasbourg, where he was greeted as he had been by many American teens during his presidential campaign - like a rock star. Obama is such a dramatic change from Bush that in Strasbourg he got "hysterical applause", one impressed observer noted, "just by telling a crowd of students that Americans don't believe in torturing people". Imagine the tumult next time, when Obama tells the Euro-kids what we do believe in.

So, what's the youth-market difference between these two boyish presidents who deal so well with continental teenagers? First off, when they get home, their under-30 bases contrast enormously.

In the United States, young people registered in record numbers to vote for Obama in November, and the White House clearly has further plans for these new cadres. Team Obama has already sent its youth brigades canvassing in the hinterlands in support of their budget. On a more practical anti-crisis level, the administration touts a two-birds-with-one-stone plan for a large-scale, energy-focused jobs program for the young that even the aging admirers of John F. Kennedy, the last truly youth-enticing chief executive, might envy - and especially after a decade of widespread youthful stupor that, as one junior journalist lamented, was largely spent "watching MTV and eating Doritos".

Compare this prospect with what Medvedev now faces: a youth corps preoccupied with surviving the financial crisis - one minister has proposed saving state unemployment offices from youthful inundation by simply designating all 17-22 year olds college students for the duration - or swelling the ranks of right-wing, xenophobic and/or radical leftist political factions that make you cringe: Nashi, the Young Guard, the skinheads, resurgent neo-Nazis, the banned National Bolsheviks and so on. The zeitgeist being collectively forged by these worthies has already been described by one sober Moscow analyst as a low-profile civil war, with "bands of fascists and anti-fascists ... in a brutal struggle that is rarely mentioned in public or in the mass media". Yikes.

I've worked with Russian youth for years, teaching them and learning from them, and I've never met better young people, in aggregate, anywhere in the world. But if Medvedev doesn't move decisively to harness and direct this group, and soon, a generation at loose ends with itself will create social problems that render the president's lofty civic projects - a working judiciary, an end of corruption and so on - utterly unrealistic amid the unfolding chaos.

If Obama draws another rock-idol welcome in Moscow this July, some stardust may fall on Medvedev for simply standing next to him. But the issue is not how to attract more groupies - it's how to keep disaffected youth from making a country's bad times far worse. C'mon, Dima: even a dork like Silvio knows he'll have to have a real go at that.