We are close to hitting bottom 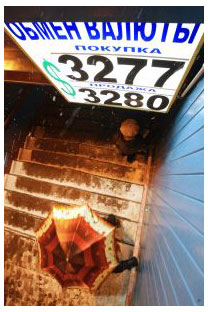 Over the past two months, manufacturers have increased expectations for an economic upswing. According to surveys by the Institute for the Economy in Transition, top managers at leading companies are anticipating increased demand. These surveys, conducted since 1992, are a proven reliable indicator; we can predict the fall in demand for manufactured goods will end in the next few months.

The decline in Russia's manufacturing sector is close to hitting bottom. This does not guarantee resumption of economic growth: the economy's relatively poor performance in the first quarter might lead to a long recession. However, there are reasons to hope moderate growth will resume by the year end.

First, there are excellent opportunities for growth as a result of ruble devaluation and import substitution. Second, there is a good chance domestic demand will increase as a result of more government spending. Until the end of February, leaders had been wary of implementing a broad fiscal policy to boost the economy. Instead, they focused narrowly on supporting the banking system with cash infusions, but only a small portion reached the real sector. Now the picture has improved for broad increases in government spending.

Third, sharp declines in industrial output in late 2008 reflected not only an objective worsening of market conditions, but a sense of exaggerated panic, which tends to be short-term. The fall in manufacturing was not in line with generally healthy macroeconomic characteristics of Russia's economy - above all, its large gold and foreign exchange reserves and solid trade balance.

Fourth, the government's assumption of a mid-year oil price of $41 per barrel is on the low side. It is highly likely the price will increase to above $45 per barrel in the third and fourth quarters; this will have positive impact.

Other positive trends include a more stable situation in bank liquidity. For example, the Central Bank's credit interest rate has stopped rising, and the ruble exchange rate has stabilized.

The Russian government has changed the focus of its anticrisis program in recent months. In the beginning of the crisis, emphasis was placed on supporting large businesses. Now, the anti-crisis plan calls for increasing consumer demand, in part by increasing individual incomes. The government is ready to increase federal spending and tolerate a budget deficit of 8 percent. The question is how effectively the plan will be implemented.

The government's ability to spur demand will depend on how well it can handle two perpetual problems in Russia. The first is whether the government will release allocated funds onschedule. The second, of course, is whether corruption will prevent these funds from reaching intended targets. The entire allocation process must be made more transparent.