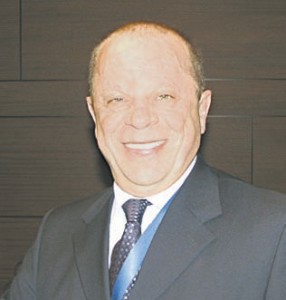 Despite the financial crisis, Italian businesses have made sizeable commitments in Russia, and four firms are already working in the Lipetsk special economic zone. This new facility has wellequipped, affordable sites, reliable communications and offers a range of tax benefits.

I've been living and working in Moscow for nearly 20 years, and during that time I've visited just about every part of Russia. I began selling woodworking equipment, and once that business was established I began to act as a consultant for Italian firms looking to invest in Russia. I worked with well-known companies such as Codest, Parmalat and Merloni Progetti.

My first visit to Lipetsk was linked to the acquisition of the Stinol refrigerator factory in 2000. A senior executive of the Indesit company and I were engaged in securing investment. Together with Russia's federal agency for special economic zones, we got the idea of setting up such a zone in Lipetsk.

In Italy, my friends dealing with investments are often asked: "How much did you have to pay in Lipetsk?" The answer is always the same: "Nothing." This surprises Italians, who are convinced that in Russia you won't get anywhere if you don't grease a few palms.

Of course the bureaucracy is complicated, but local authorities really do help investors to overcome any difficulties. Before the crisis, many Russian businesspeople thought there was no need to develop industry. But reality has refuted these notions. In my view, the financial speculators are pulling out of Russia, and the people staying are the ones investing in the industrial sector. Russia has proved to be better prepared for financial difficulties than many Western countries thanks to its significant financial reserves.

Products, not speculation In 2007, the Italian company Sest Lu-Ve opened a factory in the Lipetsk SEZ to produce heat exchangers for refrigeration equipment. It will produce 70,000 evaporators and 120,000 condensers per year, which will account for about 60 percent of the Russian market.

Other Italian refrigeration equipment manufacturers, which may acquire components from Sest Lu-Ve in the future, are already taking a close look at Lipetsk.

These include Mondial East Group, which has already acquired resident status in the Lipetsk SEZ.

Long-term vision The financial crisis is a test for Russia, offering a real chance to make the country more competitive. In the past, no business plan we considered with our Russian colleagues would be approved if it had a profit level of less than 20 percent. But now business plans have to be accepted with a yield of 7 to 8 percent. There may not be super-profits, but there will be stable development.

A Russian-Italian summit took place in Moscow in November 2008. Agreements were signed on investment by major Italian companies in such areas as nuclear and electrical power generation, oil refining, advanced technologies, and more. It was proposed that 10 billion euros will be invested in these areas over five years.

I know many proactive Italians who are ready to take risks and believe in the future. They recently came to Russia and confirmed they'll continue. Like them, I remain optimistic.

Vittorio Torrembini trained as a lawyer at the University of Parma. He was a politician for more than 15 years. From 1989 he was chief executive of Italian companies trading with Russia. Since 1994 he has been vice president and later president of GIM-Unimpresa, the association of Italian entrepreneurs in Russia. He is general director of companies implementing projects in the Lipetsk SEZ: SEST LU-VE, Mondial Group East, Alu-Pro and Fenzi.