It's Nice in the Far East 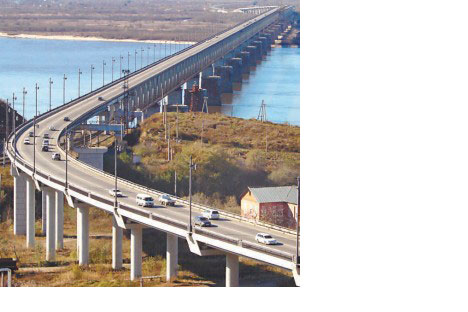 Khabarovsk, the second biggest city in the Russian Far East after Vladivostok, has a population of 579,000. The region was originally populated by a nomadic Chinese tribe. Its first Russian outpost was built in 1858.

Europeans accustomed to thinking everything east of the Ural Mountains is covered in permafrost are in for a pleasant surprise: Khabarovsk has 300 days of sun per year, and it's on the same latitude as Nice. It is therefore no surprise that poplar trees typical of central Russia alternate with those native to the taiga and other exotic vegetation - larches, cedars, Manchurian nut trees and Japanese fl owering cherries. The best time to visit Russia's Far East is the second half of May and the beginning of June, when it's quite warm but not as humid as summer. Best of all, there are no mosquitoes. We usually get the same comfortable weather at the end of August and the start of September. A century ago the people of Khabarovsk called it the new Athens. Thanks to a favourable location on the river Amur, for a long time the city served as a crossroads on trade routes between Asia and Europe.

It's the same today - a classic port city, open, light and pleasant. According to locals, the river Amur - or Black Dragon in Chinese - is the most important sight. It's only 20 kilometres to the Chinese border, but Moscow is 6,100 kilometres away, or 8,533 by train. The imposing bridge across the Amur can be viewed from a clifftop platform. This is the Trans-Siberian railway fi nal stage, the longest bridge on the route at almost three kilometres. It was built on the foundations of an old structure, the design for which won a gold medal - as did the Eiffel Tower - at the Paris International Exhibition of 1908.

The city is named in honour of explorerYerofey Khabarov, who claimed the lands along the Amur for the Russian state in the mid-17th century. The liveliest street in the city, where shops, cinemas, restaurants and cafйs nestle together in ancient buildings of red and grey brick, is named after the 19th-century governorgeneral of Eastern Siberia, Count Nikolay Muravyev-Amurskiy. One of the most beautiful structures is the 19th-century town hall. The building has an unusually expressive silhouette thanks to its high roof, with a metallic ridge on its gable and a high four-sided, hipped top crowning its corner tower. The basement houses an art gallery offering a wide choice of souvenirs. For example, a small charm made from walrus or mammoth tusk costs about Ј4, a carved fi gure from the same material about Ј40. You can see handmade embroidery by the indigenous people of the Amur region - traditional amulets, napkins, rugs, robes - and wooden items made by Nanay artisans.

Officials at the summit will stay in the Parus [Sail] Hotel. This is the smartest in the city, sitting high on the bank of the Amur. It was built as a residence for US President Dwight Eisenhower, who was expected here for the signing of the treaty to end World War Two in September 1945. Since then it's hosted distinguished visitors, including Vladimir Putin, who visited Khabarovsk as President. The city has about 40 hotels, where standard single rooms cost from Ј40-Ј100. Getting from the airport to the centre is no problem: it's about 15 minutes by taxi, for a fare of around Ј10.

A wealth of attractions
Khabarovsk has about 60 museums. The Far East art gallery includes works by Titian and Garofalo and art by the indigenous peoples of the Amur region. The Grodekov museum hosts a live exhibition entitled "Amur Fish". Anyone interested in ethnography should visit the "Mangbo Nayni" - the Nanay people, one of nine indigenous groups in the Khabarovsk region. The Sikachi-Alyan village, 75 kilometres from Khabarovsk, features basalt rocks covered in petroglyphs, human drawings from the Neolithic period. The Ј20 trip takes about six hours, including visits to the open-air Nanay housing museum, a performance by the Nanay dance troupe and dinner. At the Far East zoological gardens, people can see the Ussuriysk bear and the Ussuriysk tiger.