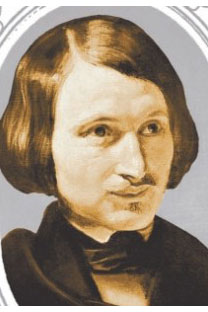 This month marks the 200th anniversary of the birth of Russian writer Nikolai Gogol. The 19th century is considered the golden age of Russian literature: Pushkin, Dostoyevsky, Tolstoy and Turgenev became worldwide names. But Gogol also paved the way for the most powerful 20th century writers, anticipating the emergence of James Joyce, Franz Kafka, William Faulkner and Ernest Hemingway, among others. Which writers provoke passionate reaction and discussion in today's society? Eugene Popov, a prominent Russian contemporary writer, discusses Gogol's legacy and impact on young Russian writers, and how they divine Gogol with their own humanism.

The saying, "Everything goes back to Gogol's `The Overcoat,'" is as true as ever, because Nikolai Gogol, author of this phantasmagorical tale about a poor clerk who becomes a ghost, is a writer for all times. He started the discussion of the enigmatic Russian soul continued by the other classic authors of 19thcentury Russia: Fyodor Dostoyevsky, Leo Tolstoy and Nikolay Leskov. He paved the way for 20th-century literature too, anticipating the emergence of Western writers such as James Joyce and Franz Kafka, not to mention Ernest Hemingway, William Faulkner, George Orwell and Evelyn Waugh. The Russian religious philosopher Nikolay Berdyayev noted as early as 1918 that Gogol had already revealed the "existential monsters" later depicted by Pablo Picasso and other Modernist artists who broke reality down into its components on their canvases.

He finished his main work, the first part of "Dead Souls," before he was 33. The satirist in him gave way to the moralist and he became effectively a different Gogol, humbly tilling the soil of Orthodoxy, autocracy and the traditional Russian way of life.

These two Gogols defined the main trends of Russian literature for years to come.

One strand is educational and moral, while the other is about Gogol's "culture of laughter" (a term coined by academician Dmitry Likhachev). Both have seen great achievements and still do. The "educators" were Lev Tolstoy, Aleksandr Solzhenitsyn, Vasily Grossman and the "back to the soil" writers who emerged in the late Soviet period. The "mockers" were Mikhail Zoshchenko; Mikhail Bulgakov; the dramatist Nikolay Erdman; the officially banned Absurdists of the 1920s-30s, led by Daniil Kharms, who was killed in prison; Vasily Aksenov, leader of the Khrushchev "thaw"; and the renowned underground author Venedikt Yerofeyev, whose novel Moscow Stations, which depicted an alcoholic's mystical journey round Brezhnev's Russia, was given the "Gogolesque" subtitle of "poem." The principal literary achievements of the former underground, writers and poets who gained national recognition only after perestroika, are also a continuation of that powerful trend that echoed the spirit of its time. The "Metamophorist" poets and the "Sots Art" and Conceptualist artists that emerged from the 1970s onwards are all part of Gogol's heritage.

The "culture of laughter" suits our new literature better than the old didactic one, hopelessly compromised by long years of triumphant Soviet propaganda; by the end of the totalitarian Communist state, readers were allergic to any kind of preaching or exhortation. The process is similar to that noted in post-war Germany by Theodor Adorno, when he said there could be "no poetry after Auschwitz." It was an essential part of healing the country, restoring common humanist values "abolished" by the evil Bolsheviks, builders of the "Brave New World."

But humanist values are eternal, and herein lies another of Gogol's lessons. It seems that our younger generation of writers, already labelled "New Realists," understand this. A generation raised in a free Russia, they combine both Gogol's trends. With a command since childhood of foreign languages, to which their forefathers had no access, enjoying freedom of speech, the absence of censorship, the opportunity to travel all over the world - for example, to spend time in Gogol's beloved Rome, where he wrote "Dead Souls" - and to read books that used to be banned, they are creating a new type of literature. They clearly see everything wrong with new society and are far from conformist, but nevertheless are not "rebels" in the 20th-century sense (anarchists, hippies, France's 1968 "revolutionaries"). They are writers who assume there is a place for preaching in journalism, social and political writing and the media, but that "direct action" is the responsibility of civil society. Their names are not yet well known to general readers, but - believe me - the future belongs to them. That's why I'll mention a few I know personally: Zakhar Prilepin, Aleksandr Karasev, Dmitriy Faleyev, Vladimir Lorchenkov, Tatyana Zamirovskaya, Petr Orekhovskiy, Anton Nechayev, Ivan Klinovoy, Aleksandr Silayev, Yevgeniy Bevers, Aleksandr Karasev, Andrey Mukhin, Marta Ketro, Aleksandr Snegirev and Viktoria Lebedeva. I recommend you make a note of these names, just in case. After all, good writers are always in short supply.

Nikolai Gogol was born in 1809 and lived for less than 43 years. He found fame with "Evenings on a Farm near Dikanka"-humorous stories about Ukrainian life. Gogol later gave literary life to the "little man" - usually a minor official crushed by the administrative system. Gogol's powerful satire flourished in his comedy play "The Inspector General" and his novel "Dead Souls," which captured the life and thinking of provincial landowners and officials. "The Inspector General" caused a real sensation; nothing like it had ever been seen. Emperor Nikolay I, who attended the premiere, said, "He let everyone have it, most of all me." The great thing about Gogol's gift was his characters; they were not just copied from real life, they were complete fictional types that reflected profound understanding of human nature. His heroes became bywords, which is rare with any other Russian writer, and the way he revealed such striking inner life in the most mundane examples of human existence is without precedent in Russian literature.

Numbers
93,799
BOOKS TRANSLATED FROM RUSSIAN INTO OTHER LANGUAGES In 2008 this was fourth highest in the world after English, German and French.
Source: Rudiger Wischenbart

Lyudmila Ulitskaya
Biologist by training and geneticist by profession, Ulitskaya began writing in 1989, first published in 1994. The first collection of her stories, "Poor Relations," came out in France. Ulitskaya's work has been translated into 30 languages. In 2007 she received the first Big Book prize for "Daniel Shtain,Translator."

Viktor Pelevin
According to French Magazine, Pelevin is among the 1,000 most significant people in contemporary culture. His work has been translated into all major languages. His most celebrated early books are "Chapayev i pustota" (published in the U.S. as "Buddha's Little Finger") and "Omon Ra." His novel "Generation P" (published in the U.S. as "Homo Zapiens") won Germany's Richard Schoenfeld prize.

Darya Dontsova
The female detective genre entered Russian literature with a flourish in the 1990s, and the most popular of the "women detective writers" was Dontsova. In 10 years, she has penned 100 bestsellers, with more than 110 million copies printed.

Sergey Minayev
Minayev's latest, "RAB, An Anti-crisis Novel," is about the hangover following the prolonged euphoria of rising stock prices and cheap consumer credit that turned a middle manager into an icon of modern Russia.