You know an old overcoat won't ever let you down 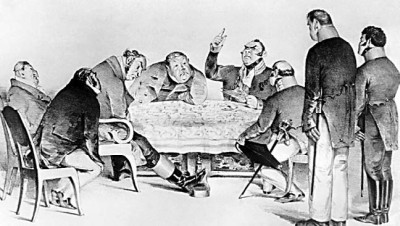 According to legend, a Soviet critic once cut a piece of cloth from Gogol's overcoat, then on the writer's corpse, to cover his edition of Dead Souls. The tragedy of this action only just overmasters the irony that it wasn't a copy of The Overcoat

Reading Gogol today, on the 200th anniversary of his birth, I immediately thought of synecdoche - what the logic of literary theory calls the part that stands for or represents the whole. Thus with noses, overcoats and book jackets - we become accustomed through Gogol's stories to a character's nose becoming a person in its own right; so too an overcoat becomes a mythic symbol that represents a single man's life. Strange? You bet. But perhaps proof of the way things work in life, where parts masquerade as systemic wholes - a novel, for instance, becomes a world. This fragmentary focus explains the melancholy urge I feel to laugh aloud, when the principal character in The Overcoat, the poor clerk Akakii Akakievich, spends so many prepositions and adverbs on pathetic assurances to the demonic tailor Petrovich, as he denies that his ragged old overcoat needs replacing: "But I, here, Petrovich... an overcoat, cloth... here you see, everywhere, in different places, it's quite strong... a little worn, yes, here on the shoulder it is a little... do you see? this is all. And a little work."

Petrovich's reply to Akakii blasts these protestations away: "No - it's a miserable garment." Nonetheless, Akakievich's character is complete in its own partial sense, and we learn of the clerk's satisfaction with his narrow lot in life, his neglect of worldly trappings and his love of the letters (characters) that he crafts at work: "In that copying, he saw a varied and agreeable world. Enjoyment was written on his face: some letters were favourites with him; and when he encountered them, he became unlike himself; he smiled and winked..." As an English reader, I enjoy Gogol's willingness to jest at the Russian national character, a trait absent from English literature circa 1835, where satire often sits uncomfortably alongside smug national self-congratulation. Take this quote from The Nose: "Like any self-respecting Russian artisan, Ivan Yakovlevich was a terrible drunkard." Athough we can, in part, agree with Nabokov that Gogol is not a realist per se, rather, in his surrealities we discover a genius for escaping the intolerable everyday that we fi nd in his work.

For Gogol is, above all, a fabulist of the highest order - and he suspends the laws of nature for the sake of the fantastic in both The Overcoat and The Nose, in terms that make the real in itself seem uncanny, absurd, barbaric. Indeed, perhaps the most telling aspect of both stories - a point especially pertinent to today's lurid tales of executive excess - is their implicit condemnation of the arrogance that most often accompanies bureaucratic ambition. So much so that in The Overcoat we feel respect and sympathy for Akakii as a naпve and almost childlike character who endures verbal bullying from colleagues, only reacting when it becomes intolerable and affects him physically. When his tormentors jog his writing hand he cries out: "Leave me alone! Why do you insult me?" The narrator then informs us that one of the ageing clerk's young colleagues translates this utterance into human terms as: "I am your brother!" On future occasions this young man covers his face with his hands when he recalls the shameful episode, when appearance and social protocol took precedence over his ability to live a whole and wholesome life.

These everyday dilemmas, which force us to compromise the integrity of our personalities and infl ict pain for the sake of social advancement, are extant today. The ghost of Akakii Akakievich still haunts a shivering man in an old overcoat, huddled in the corner of a London bus, and The Overcoat reminds us that we are far from being complete men and women 200 years after Gogol's birth. What's more, the very absurdity in realist terms of stories like The Nose counsel contentment; help us to sniff the air anew, see the world differently - to not snuff out our lives on trifl es, or overly expensive overcoats for that matter.