Economic perks for the foreign investor 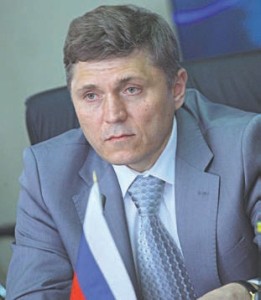 Andrei Alpatov: "The important thing is to meet a real need."

The world crisis has not changed the government's plans for special economic zones, a public-private partnership that has been developing for three years. Special Economic Zones may become an effective anti-crisis policy tool, as the head of the Federal Agency for Management of SEZs, Andrei Alpatov, explains here.

What makes special economic zones attractive for investors?
Business in SEZs means tax, customs, administrative and other benefits, and guaranteed legal protection. The government saves investors' time and money by providing the business infrastructure and climate. The state has already invested 33 million rubles (nearly $1 billion) in infrastructure projects. On specific industrial projects, the investor saves about 20 percent of the cost. Investors also save time because they do not need to settle land issues, as everything - the areas, zone boundaries, and more-has already been taken care of. Yet it is, of course, the tax and customs exemptions that are the biggest bonus.

What are the requirements on SEZ residents?
The main requirement is investment: one ruble of government money should be matched by three rubles of its own. Another indicator is labor productivity, which should be at least 1.5 million rubles per work place per year. Most requirements are, however, determined on a caseby-case basis.

Will the government's plans to develop SEZs be affected by the world economic crisis?
SEZs may become an important anti-crisis policy tool, because they give residents a substantial competitive edge. In general, cuts in budget financing for SEZ infrastructure construction cannot be ruled out. We have looked at several scenarios, including the worst taking into account only the money already disbursed (about 70 billion rubles). Some construction projects may be "frozen," depending on how effective and promising they are. Some residents have complained that the credit crunch is extending the payback period of their projects. We can help them by offering
long-term loans, interest rate subsidies or providing further tax cuts. We are currently in consultation with Vneshekonombank and the Russian Development Bank on all these issues and they seem to be willing to meet us half way.

Do you anticipate any further changes in the law in favor of residents owing to the crisis?
Legislative amendments are needed. For example, under the law, a legal entity can become an industrial SEZ resident if it meets a capital investment target of 13 million dollars. Practice has shown that this is an unrealistic figure, which should be cut to 4 million dollars. A law to this effect is already pending before the State Duma.

What are your immediate plans?
To successfully carry through the SEZ program. The emphasis today is on tourism and recreation zones. The Azure Katun zone was launched in the Altai Area last year and it has already been visited by 13,000 people. The next step should be to build hotels there. In the spring, the nearby Altai Valley complex will be opened. We have 70 percent of the requisite number of investors already registered as residents.
This year, we have announced SEZs in Buryatia and on Lake Baikal, where all the preparatory work has already been completed. Private investors are ready to invest several tens of billions of rubles. We believe that, in the field of tourism and recreation zones, cooperation with the United Arab Emirates can be useful. These countries have vast experience; they know how to build and run huge tourist complexes. We would be interested in applying this in one or two projects.
In the technical innovation zones, the challenge is to create a single technological chain for all companies, from business incubator to production. Such infrastructures are already in operation in Dubna and Tomsk and a second site in Zelenograd has been launched. We hope to start construction in St.Petersburg this year. The important thing is for it to meet a real need. The numbers of those wishing to become SEZ residents is growing, no matter what else is happening.