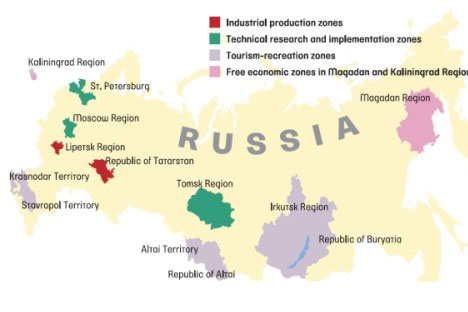 Since the beginning of 2009, foreign direct investment into the Russian economy has totalled about $8.4 billion. Given the general economic downturn, this big number is likely to increase as more investment is attracted to Special Economic Zones.

The Russian government has set its sights on economic diversification in order to switch from a resource- to an innovationbased economy. To assist with the transition, Special Economic Zones (SEZs) have been created with preferential taxation and pre-existing infrastructure on production sites.

SEZs are not a new concept: such zones have been around in many countries for about half a century. In Singapore, for example, the first SEZs appeared in the 1960s. Over several decades, Singapore impressively leapt to economic and technological leadership.

Tax and customs exemptions coupled with low labor costs make SEZ-based production a popular business model with world-class corporations: Ralph Lauren, for instance, makes clothes in the Noida SEZ in India, and the German Knauf has a thermoplastic production facility in the Kaliningrad SEZ of Russia.

The first tax havens appeared in Russia in the mid-Nineties. But tax breaks alone were not sufficient to develop technology-intensive industry and get investors onboard. Starting businesses required in-place infrastructure and streamlined administrative support.

The first Russian SEZs that met those requirements were established in 2005. Their number has since grown to 13 zones with 170 registered resident companies and a stated investment of $4.2 billion.

In less than four years, Russian SEZs have evolved into effective investment centers, and their success is recognized by foreign experts. Back in 2007, Lee Kuan Yew, minister mentor of the republic of Singapore, noted while on a visit in the Alabuga SEZ in the republic of Tatarstan that he was "impressed with the significant progress which has been made during one year."

Alabuga, nicknamed the "Russian Detriot" by Russian media, hosts assembling facilities for Fiat Ducato vans, Isuzu trucks and their components. In 2009, experts expect Alabuga to attract more than $600 million of production expenditure versus $240 million in 2008.

Other Russian hubs emerged in the form of automotive clusters in St. Petersburg, with Ford, Toyota and General Motors plants, as well as upcoming Nissan and Hyundai facilities, and new production capacity in Kaluga.

Who is afraid of the crisis?

Apart from carmakers, the SEZ in Tatarstan has caught the eye of other manufacturers. In early April, Eelco van Heel, President of Rockwool International, leading producer of stone wool, confirmed the company's plans to build a facility in Alabuga for producing thermal insulators used in construction and shipbuilding. The Danish company is slated to build a production complex scheduled to be commissioned in 2010. Investors also show interest in tourism and recreational areas that offer new service business opportunities. Out of 33 new resident companies registered in Russian SEZs since the beginning of 2009, 19 represent the tourist industry.

According to Andrey Alpatov, head of the Federal Agency for Special Economic Zones Management (see interview), projects are underway to develop three Siberian recreational areas in the republic of Buryatiya, the Altai Territory and the republic of Altai. Hopefully, over the next two years, Russia will add new resort-studded Davoses to its Detroits.

Types of SEZs
INDUSTRIAL PRODUCTION ZONES
Required investments of $13 million at least (including $1.3 million in the first year). There are no similar requirements for other SEZs. Not more than 8 square miles. Life of no more than 20 years.

TECHNICAL RESEARCH AND IMPLEMENTATION ZONES
Are created on no more than two territory plots. Life of no more than 20 years.

TOURISM-RECREATION ZONES
Are created on one or several territory plots, determined by the government. May include the whole territory of any administrative-territorial entity. Rendering of tourist and healthimproving services.