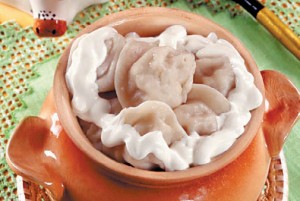 A culinary debate has raged between the two countries for as long as anyone can remember, and continues to this very day - sometimes even in these pages. Last month, for instance, we learned Chicken Kiev is not the obviously Ukrainian dish one would think; it was, in fact, a French creation adapted by Russian chefs in the 17th century. The origin of borscht is a topic so explosive that entire forums exist on the internet to debate whether the famous red soup is Russian or Ukrainian. Despite all this, vareniki - little pockets of dough that can be filled with anything from fruit to liver - are one of the few foods that seem to defy all controversy.

Ask a Ukrainian about the origins of vareniki and they are likely to look at you strangely, as if you inquired whether the Earth is truly round or if water is wet. Ask a Russian, and theyґll grudgingly admit that even their troublesome Slavic cousins come up with a good idea from time to time. The fact that this dish actually came from Turkey, where it was called dyushvara, doesnґt seem to bother anyone, least of all the Turks.

There are many varieties that come in a box, but ideally they should be prepared at home. Here are two easy recipes for vareniki. Both taste great with sour cream.

Preparation
Mix all ingredients into a large bowl and stir, then knead until the dough attains medium thickness.
Roll the dough into a sheet 1-11/2 millimetres thick.
Cut the sheet into 5x5 centimetre squares.
Place a teaspoon of filling into each square.
Fold into triangles and seal corners.
Drop into a pot of salted boiling water.
Stir frequently and remove when vareniki float to the top.

Cherry filling: Wash cherries and remove pits. Put cherries in a bowl, mix with sugar and let sit for 3-4 hours. Spill out any excess juice that forms in the bowl and place a teaspoon of cherries into dough, as indicated above.
Potato filling: Boil and mash potatoes. Finely chop onions, saute together with dried mushrooms until onions turn a light brown. Mix together with potatoes, butter, dill, salt and pepper. Place a teaspoon of filling in dough, as indicated above.