Eurovision 2009: the Russians are coming! 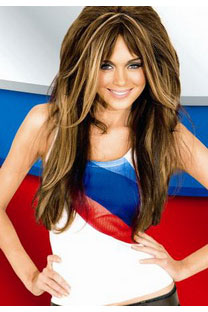 Moscow is pulling out all the stops for Eurovision
From time to time, the papers carry "secret" information about the amazing scale and technical sophistication of the set being built at the Moscow Olympic sports complex, the main venue for the show. The most fashionable and glamorous female Russian TV presenters have almost been coming to blows over the right to present the concert. But it looks like they don't stand a chance. The names being touted by those who know are Anna Netrebko, the Russian star of world opera, and Milla Jovovich, the Hollywood actress with Russian roots. It's as if viewers are being prepared: you're about to see something incredible, the likes of which you've never seen before. There can be no doubt Moscow is doing everything it can to put on a good show for its European guests. In the end it's a matter of prestige. And that's not all.

When a young unknown called Dima Bilan won Eurovision 2008 in Belgrade, he shot from the ranks of Russian showbusiness to being something of a national hero. Normal people who would never in their right minds have gone to Dima Bilan's concerts or listened to his songs were as enthusiastic as little children. Russians celebrated his win by taking to the evening streets with champagne and fireworks. Dima had not just won any of Europe's musical contests, he had fulfilled the Great Russian Dream - to win the Eurovision Song Contest. It's fair to say that for the last 15 years, ever since even the possibility of taking part in the contest was opened up to Russian artists, the whole country has been single-mindedly working towards this goal.

Every year, on the eve of the contest we love so dearly, there would only be one topic in all the papers: who is worthy of going to Eurovision? Then, through a process of intense discussions verging on insult, it would become clear no one was worthy. No, there were no singers in Russia capable of winning over the demanding European viewers. But we did not lose hope. First we sent girls, then boys, then mixed groups, but it was no good. We decided to send the best of the best. We chose Philippe Kirkorov, at that time our number one singer. The result: 15th place. The country was rather surprised, but we swallowed the offence in silence.

The following year we decided to send the "heavy artillery" - Alla Pugacheva. Since these words are unlikely to mean anything to the foreign reader, we shall explain. She is our low-budget version of Madonna. Like the American star, Alla has been the queen of Russian singers for the last 30 years. There's even a joke: "Who was Leonid Brezhnev?" "A minor politician in the Alla Pugacheva era." You can swap Brezhnev's name with that of any recent Russian leader: there have been quite a few of them during Pugacheva's lifetime. In short, she's our national treasure. Alla took her preparation for the contest seriously - she recorded a song called "Prima donna" so the public would know who it was dealing with. The result? Seventeenth place. The nation gasped - if even Pugacheva couldn't pull it off, then... Obviously there must have been an anti-Russian conspiracy. The only person smiling was Kirkorov, and we can imagine why.

The hotheads among us came up with an idea - no, not to send in the tanks but simply to boycott Eurovision. We don't stand a chance anyway, they said. But fortunately common sense prevailed, and unexpectedly the situation began to change. First the young singer Alsu took second place. Then several times in the top ten. In the last three years we've always finished in the top three. And finally, the long awaited victory. And straight away Europe started talking about a Russian plot, saying Moscow's hand had seized the prestigious contest by the throat. Let's be honest - that's exactly how it was. It's simply that Moscow hasn't got one hand, or even two, but several, and they have "crept" quite a long way from their historical homeland.

The fact is that the Russian diaspora is quite widespread, not only in the former Soviet republics but also Israel, Germany and even Turkey, which is full of our tourists during the contest. There are truly lots of us. It would seem that over the 15 years Russia has been taking part in the contest, the number of our people in European countries has finally reached the level required for us to win.

It's difficult to resist this, but there is a way out, The wisest country turns out to be Norway - they've sent a singer of Russian extraction to the contest! Alexander Rybak, who was brought from Belorussia as a child by his parents, is obviously quite a pleasant and talented performer, but it would seem his origins also had a part to play. It's no coincidence the bookmakers already have him down to win. As a rule, whether it's presidential elections or song contests, bookmakers have a very good feel for the odds.