We must focus on results 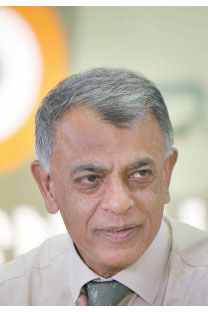 Ashok K. Baweja recently stepped down as Chairman of Hindustan Aeronautics Limited (HAL). Shortly before, during his last visit to Moscow, he spoke to RIR correspondent Irina Kozyreva about his views on Indo-Russian aerospace cooperation and what he thinks the future will hold.

In India, HAL is operating all types of Aircraft and Helicopters and main role for Indian Air Force fleet is still played by Russians. We made 4 types of MIG-21, MIG-27 and others, Su-30MKI multi-role fighter aircraft, IL-78 tanker aircraft, Mi-17-IV military transport helicopters, Ka-31 Helix airborne early warning helicopters, MiG-29K, including MiG-29KUB version, Ka-27PL (Ka-28 version) and Ka-31 helicopters, etc. All these flying machines are excellent platforms, and it is the reason why until today hundreds of them are being flown by the Indian Air Force and Indian Navy.

Now, I could define two major directions for Indo-Russian cooperation - developing the 5th generation fighter aircraft (FGFA) and multi-role transport aircraft (MRTA). We concentrate on these two projects, though it doesn't mean that we are going to avoid any new opportunities in future.

The Fifth Generation Fighter Aircraft (FGFA), which we develop jointly with Russians, is a derivative project from the PAK FA being developed for the Indian Air Force. HAL will be contributing largely to composites, cockpits and avionics. The FGFA is to enter squadron service by 2015, and will replace at least three classes of aircraft in the IAF. This is futuristic aircraft - that's why the process is rather slow. We need to take into consideration all the laws and regulations from both sides as well as to keep in mind Indian requirements.

For manufacturing 60-tonne multi-role transport aircraft (MRTA), HAL has entered into a $700-million joint venture (JV) agreement with Irkut Corporation of Russia. Under this 50:50 JV, Ilyushin Design Bureau of Russia will design the MRTA and Irkut corporation of Russia will develop the aircraft. Series production of 100-seater MRTA aircraft will be taken up by the Transport Aircraft Division (TAD) of HAL at Kanpur. Initially, HAL plans to develop MRTA as a freighter aircraft for military use.

Another big area of the HAL activities is in developing the Helicopter fleet. There is a huge demand for different types of helicopters in India and HAL is strongly involved in concerned programs. In 2006, for example, we announced our plans to build a Light Combat Helicopter (LCH). We are going to roll out the first of three LCH prototypes in 2009, with initial operational clearance being granted by March 2010 and full certification of airworthiness being granted by January 2011.

Other models are also in focus and in this area we concentrate on producing our own helicopters, though we don't exclude more active cooperation with Russia. Russian helicopters are well-known in India and experienced Russian engineers are very profound in their knowledge. We would look for opportunities to work together.

Much time and effort is spent by HAL in organizing proper training courses for their specialists. All people, who are working in aviation, are extremely valuable resource for India and we try to do our best to fulfill their needs and requirements. Last year, we signed an agreement to establish a joint venture company with the CAE to open a helicopter training centre in Bangalore. It is currently scheduled to begin operations in 2009 by providing both civil and military helicopter pilot and maintenance training services. CAE expects to design and manufacture one full-mission simulator featuring CAE's revolutionary roll-on/roll-off cockpit design, which enables cockpits representing various helicopter types to be used in the simulator.

Among other areas of HAL's interest is the technology development in areas such as combat systems, machine systems, composites, avionics. It is a part of the aircraft production, which is up to 45 % of each aircraft cost. This is also the reason why we prefer to have our own technology development units and after some years we achieve good results. Technology cooperation is also quite well-known in terms of Indo-Russian relations, though last years we preferred to maintain the trend for self-sufficient developments in order to make India a strong Aviation hub in Asia. Of course, we are working closely with Russian engineers, but today we are much more open for wider International ties. As an example, you could take our agreement with the Airbus. There are many other cases. Nevertheless, I suppose, that this part of our cooperation with Russia is not less successful and productive than other areas.

Also, I would like to mention a comparatively new area for Indo-Russian bilateral cooperation - Civil Aviation. As far as I know, in Russia, there are some good Civil Aircraft like Tupolev, Yakovlev and Sukhoi. We would be interested to expand our cooperation in this direction. Civil aviation market in India is huge, and serious demand comes from both industry and aviation companies. We have already, though slightly, discussed some perspectives of working together for civil aviation projects and found that it could be a new brave opportunity to increase cooperation between Russia and India in this field. Though, in Russia's case, the major problem is the availability of spare parts. It slightly worsens the whole impression, but I suppose that expanding ties would solve this problem.

Concluding the brief description of Indo-Russian air-partnership, I would like to say that we are closely working with Russia for more than 10 years (and almost half a century if the erstwhile Soviet Union is included). Until now I feel very comfortable to interact with Russian Aerospace specialists. Even if there is any problem during negotiations or project implementation, we could always sit together, discuss and resolve everything. Confidence that the matter can be mutually settled is very much there.

Aviation and Aerospace industry is very complicated and everybody knows well that multi-layered projects could never be realized in the manner of Swiss watches. The main focus here should be only on results - and I could say that from this point of view, Russia still seems to be a very reliable partner for us.

RIR Dossier
Ashok K. Baweja held the post of HAL Chairman from 1 December 2004 until March 2009. His career with the company started in 1972 as a management trainee, and included key production, planning and manufacturing positions. In his previous role as Director of HAL's Design Complex, Baweja was responsible for the Advanced Light Helicopter (AHT), Intermediate Jet Trainer (IJT) and Light Combat Aircraft programmes, as well as for a number of modernization efforts on fixed-wing aircraft and helicopters in service with the Indian military. He initiated programmes for the upgrade of the Jaguar Navwass, Lancer, Cheetah and MI-17. Baweja also served as head of marketing and holds an MBA in economics.