Running away from the city 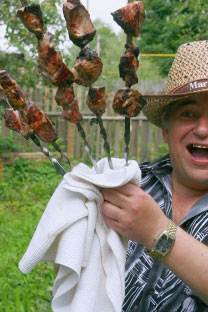 As soon as spring arrives, one can observe roughly the same picture every Friday afternoon in any large Russian city. From about 4 o'clock on, all the roads leading out of the city are jammed with cars.

The cars are jammed with people, pets and all sorts of odd things. It looks more like a mass evacuation, a flight from the city. And in fact, that's just what it is. All these people are fleeing from their tedious urban routines to a place where they can feel genuinely free for at least a couple of days: the dacha.

The dacha is a unique phenomenon in the life of anyone who lives in the boundless expanses of the Russian Federation. Although you'd think it was nothing special. A small plot - 0,15 acres - with a few currant bushes, apple trees and a vegetable patch featuring carrots, parsley and dill. A small wooden house with no telephone and no running water and an outhouse at a discreet distance.

In the last decade, of course, Russia has seen its share of over-the-top country houses - palaces - with columns, balustrades and similar excesses. But these fruits of an architect's wildest imagination have nothing to do with dachas. They and their inmates live parallel lives behind high fences, about which some other time.

In the old days, to have a dacha was a privilege. They were given only to society's elite: senior officials, writers and scientists. Later on the Soviet regime allowed all to acquire a dacha. This marked a serious departure from Communist ideology. Now the Soviet man, raised on a negation of private property, could own his own piece of earth. Who knows, perhaps this was the beginning of the Soviet Union's eventual collapse?

Be that as it may, going to the dacha in the pre-cellphone era was like going to an uninhabited island. A person received the legal right to temporarily escape the total control of society. "I was at the dacha" - that alibi could explain any long absence. A sort of internal emigration. To say nothing of the fact that Soviet citizens grew huge quantities of vegetables and berries at their dachas, thereby helping the Party and the government solve the food-supply problem. Today no such problem exists, but the habit of putting up vegetables, mushrooms and preserves for winter remains. Cucumbers one has pickled oneself, like jam made from one's own raspberries, can't possibly be compared to anything bought in the shops.

Practical aspects aside, the dacha has one purpose and that purpose is spiritual. The problem is that Russians, who tend to think globally and worry about the fate of the world and their country, are sometimes powerless to organise their own free time. As a result all their agonies end on the couch in front of the television. The dacha solves that problem once and for all. No one has to think how to entertain themselves on the weekend or waste time arguing with family members. "We're going to the dacha" - that says it all. At the dacha everyone finds an occupation after his or her own heart. The husband bangs another nail into the wall, the wife weeds the vegetable patch, the children and dogs are left to their own devices and don't bother anyone. The dacha brings families together. And in the end, "I was at the dacha this weekend" sounds a lot better than "I sat at home watching television". Although you can watch TV at the dacha too.

The dacha is also home to a culinary ritual known as shashlik (shish kebab) - a national Georgian dish that has magically metamorphosed into the house specialty at dachas throughout the former Soviet Union. Because shashlik tastes best in a group, it's an excuse to invite friends out. Making the shashlik is such an absorbing process that it's all you talk about. First you have to choose the right meat, then the right recipe for the marinade (everyone has their own, of course, and everyone's is "the best"). Then the fire has to be made and allowed to burn down until it's almost out, but still smoldering. If you catch it just at that moment there's a chance the meat won't burn and will roast evenly. Meanwhile, the fire keeps threatening to go out altogether compelling family and guests to furiously fan it with pieces of cardboard. You'll be so involved in all of this, you won't even notice when it's time to go back to the city!