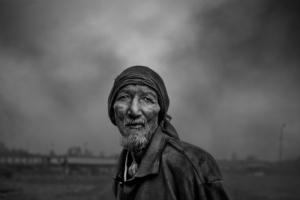 The Photography Contest in Yekaterinburg was part of the International Festival of Photography "From the Great Wall of China to the Ural Mountains," preceding the SCO (Shanghai Co-operation Organization) and BRIC (Brazil, Russia, India and China) summits to be held in the city in mid-June.
About 400 photographers representing nearly all Eurasian nations, as well as the US and Canada, took part in the contest. Over 3,000 entries were submitted. Of those, only 200 photos by 43 photographers were shortlisted.

The winning series pictures gem-mining at the Piyain River. The industry is destroying the environment and uses child labour, but many Bangladeshis simply have no other source of income. The idea behind Khaled Hasan's photographs is how a source of life can turn into a source of death.

"Over two thousand men, women and children are engaged in gem-mining. There is no law in this stone industry. Many kids suffer from hearing disorders because of the high-frequency inside of mining machines," says the author.