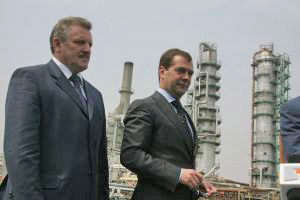 Russia is finally giving up the Energy Charter, a rather strange document according to which our country at some point took on the responsibility to provide Western companies with access to our oil and gas pipelines without essentially receiving anything in exchange. President Dmitriy Medvedev stated this clearly and categorically at the Russia-EU summit in Khabarovsk. But the real success was the fact that the Energy Charter ceased to be the basis for dialogue on energy between the EU and Russia. The European leaders were forced to admit that special new agreements are needed, the content of which must be discussed - with Russia.

The summit in Khabarovsk and the meeting of prime ministers of the Commonwealth of Independent States member countries that took place at the same time are a striking example of the effective work being achieved by the Medvedev-Putin pairing and their well coordinated "four-hand game". Medvedev had a tough dialogue with Javier Solana and Jose Manuel Barroso and Putin did the same with Yuliya Timoshenko.

The EU officials probably understand clearly now that Russia cannot be the only guarantor of gas supplies to Europe. Medvedev's "What's the point?" was a cold shower for Solana and Barroso. Putin and Medvedev made it clear to the EU and Ukraine that Russia regards normal consumption within Ukraine as a condition of stable gas trans-shipments, but will not finance on its own the stockpiling of gas in Ukraine to meet that demand. Above all, the cost of this issue (more than 4,000 million dollars) is too high. Credit is required, and we are prepared to take part in providing it to our western neighbour, but only jointly with the EU.

At the same time the Ukrainian authorities must be responsible and keep to their agreements, especially since Ukraine is an unreliable debtor. That is precisely why Russia's Finance Ministry did not accede to its February request for a 5,000 million loan. There is a perfectly obvious way of providing it, which corresponds with Russia's national economic interests: using the Ukrainian gas transport system (GTS) as security. As Putin rightly remarked, if you haven't got any money, you can forget your ambitions.

Is a new crisis in Russia's gas supplies to Europe possible? Ukraine's Vice-Premier Oleksandr Turchinov - Timoshenko's right-hand man and mouthpiece - stated that there was no reason why there should be. But in my view he's too optimistic. The situation may get worse, but only on two conditions. First, if the EU fails to recognise that Ukraine is not in a position to meet its own gas requirements by itself and fails to provide it with a syndicated loan (jointly with Russia) for stockpiling gas. Second, if the EU decides to take part in modernising Ukraine's GTS (or even to create a consortium to manage it) without Russia. Such a decision, bearing in mind the Ukrainian authorities' commercial reputation and style of conduct (not to mention their lack of a consolidated position, as Putin rightly noted), cannot guarantee reliable supplies - our country's participation is absolutely imperative. And anyway, what's the point of Russia taking part in meeting Ukraine's internal demand and providing that country with loans if the modernisation of the GTS goes ahead without us?

The main barriers to the agreement between Russia and the EU which is being drawn up remain the European politicians' stereotypical thinking based on the Energy Charter. The other problem alongside this is the policy of the Ukrainian authorities, and above all President Yushchenko, which relies on not fulfilling agreements on gas trans-shipments and developing a dialogue on gas, and on confrontation with Russia. Yushchenko, incidentally, has recently been inclined not to see even the direct commercial benefit to his country if this benefit is linked to Russia. Thus the President of Ukraine has decided to divert the Odessa-Brody oil pipeline to the North. It's by no means clear whether it will be filled if he does, but according to the experts almost four years of conveying Russian oil in the opposite direction, to the Black Sea ports, has already brought Ukraine up to 230 million dollars.

Today it is obvious: if the EU wants to deal with responsible partners and definitive decisions, the opinion of the Ukrainian leadership should be taken into consideration only after consultations between the EU and Russia. Any barriers can be overcome if Russia and the EU's stances are clear and open and both sides are working for agreement. Outmoded agreements (the Energy Charter) and ideologized myths (for example, the idea that Russia is pursuing an imperial policy towards Ukraine) must give way to pragmatic motives.