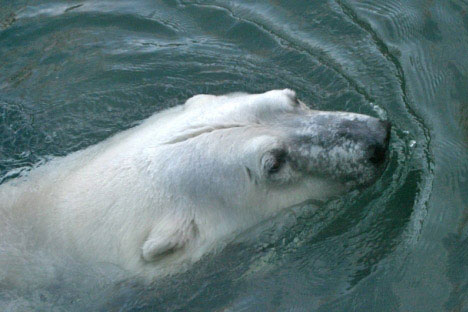 A little while ago the whole world (or rather, that part of the world that has easy access to the internet) was jealously following the progress of a competition to get the best job in the world.

And it certainly was - the conditions offered were simply fabulous: an ocean island of natural beauty with everything you need for a life of sweet idleness. Just to live for a while in a place like would be a delight, but the caretaker of this island was going to get paid for it too. Nice work if you can get it, as they say.

There were some people in Russia too who wanted to take part in the competition. One girl even got almost to the final. But just in time, some "well-wishers" discovered some pretty provocative photos of her displayed on a website, and the organisers dropped her from the contest without any explanation. And yet, you might think, what's so special? It's not as if she were running for the job of head of the UN. And looking after an island is much more comfortable in a bikini - that's to say, pretty much naked, as the girl appeared in the photos. But be that as it may, the best job went to a Briton - which is quite logical, considering the Australians and the British are almost the same family.

Nevertheless, there are still places left in the world that you can escape to for half a year to have a rest from civilisation. After all, the main advantage of working as caretaker on this island is not its beaches and other holiday attractions (anyone can buy a trip there and go away for a break): the main thing is that the winner of this competition gets the lucky - and moreover legal - opportunity to get away from all the stresses of life in the so-called civilised world for six months. And again, they don't have to pay their own way. It's one thing to get away from the world like some sort of hermit, but quite another to do it as a paid job.

So, now listen to this - the best job in the world, mark two. A Russian meteorological station in the Arctic is advertising a job for a forecaster - a kind of "weather caretaker". At first glance there couldn't be a greater difference between working on a tropical island and working on an Arctic research station. But don't be too quick jumping to conclusions. Yes, let's be frank, it's no holiday resort. Instead of beaches it has snowdrifts and permafrost. Instead of exotic fish and birds it has polar bears that regularly visit the weather station looking for something to eat (quite possibly including the weather forecasters). And the pay is nothing to write home about - although on the other hand there's absolutely nothing to spend it on here. Everything's included, as they say. The weather station guarantees tasty and healthy food. The joke is that after a week you gradually start to forget your former life. Problems that quite recently were worrying you become of little consequence. Within a month you understand that there's nothing more important than keeping an eye on the weather and making sure you don't end up as a polar bear's breakfast. The effect of disconnection is complete, QED. (By the way, psychotherapists charge a lot of money for this kind of stress therapy.)

Sooner or later there comes a time in the life of every person as they wage their individual fight for survival in the urban jungle when they want to say to hell with the whole thing and escape to some uninhabited island. But very few actually decide to do it. And the reason why is not the cost of the air ticket to the nearest island but the fear of making a fundamental change. Yet nevertheless the fashionable downshifting movement is gathering pace. It's even reached Russia. The Mecca for Russian downshifters is the Indian resort of Goa. It turns out that for the money you get by letting your flat in Moscow you can rent a decent villa in Goa and have enough left over to live on. At the height of the current crisis the Russian colony in Goa has grown significantly. Restaurants serving Russian cuisine have opened here, and shops selling Russian produce, and you can hear Russian spoken everywhere. Mind you, the same phenomenon (although not yet graced with the beautiful name of downshifting) was widespread in Russia at the starts of the 1990s. At that time lots of business people who'd made their first million dollars (easy money at that time) threw up everything and left for warmer climes. This flight was more out of fear of retribution (the million was invariably made on the wrong side of the law) and a desire to sit out the difficult days. As a rule they went to live in Cyprus, where they bought a villa and a yacht, what every gentleman needs. True, after a couple of years they would be surprised to discover that sitting on a yacht and fishing all the time quickly gets boring, and the million is not only not "easy money" but also soon runs out.

The duties of a tropical island caretaker and a weather forecaster on an Arctic station have one important thing in common: they are both primarily jobs, even though they may be disguised as an escape from civilisation. Moreover, they're jobs for a strictly limited time: six months. That's quite enough to have a fling and get away from your daily routines and from your own self, weighed down by everyday problems. But what a pleasure it might then be to return to normal life, and to realise that actually our life isn't that bad. In fact, life is fine! To have that feeling, it might even be worthwhile heading off for an Arctic weather station.