In pursuit of competence or loyalty? 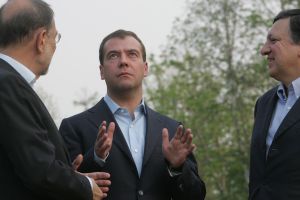 Medvedev, Solana and Barroso in Khabarovsk

The State Duma has approved amendments to the law on Russia's Constitutional Court at their first reading. The deputies approved by an overwhelming majority President Medvedev's proposals to change the system for appointing the chairman and deputy chairmen of the court. According to the existing rules, the chairman of the Constitutional Court is elected by the judges, but under the new law he or she will be proposed by the president and appointed by the Council of the Federation. The term of office increases from three to six years.

Komsomolskaya Pravda notes that "the appointment procedure will be public, and senators will be able to put any question to the candidates".

The media are quoting the views of politicians, depending on their party allegiance. Kommersant quotes the viewpoint of Vladimir Pligin, from the United Russia majority party. He considers that the appointment procedure "has been approved by the country's two highest courts and has proved its effectiveness", and is also in line with the way "such matters are resolved in a whole range of European countries and in the USA". His opponent from the Just Russia party Gennadiy Gudkov pointed out that "in the USA the president indeed appoints the judge, but for life", not for a few years, as in Russia. That's a big difference.

Vremya Novostey cites the opinion of a Russian Liberal Democratic Party deputy: "We're lumping together all three branches of government: the president proposes a candidate, the executive in the form of the Council of the Federation approves the appointment, and the legislature in the form of the Constitutional Court implements the decision. In other words, we're effectively breaking the Constitution." A spokesman for the Right Cause party, which has no seats in parliament, believes that "the election of the chairman by the members of the Constitutional Court was one of the factors in its relative independence. Now that independence is being removed."

Energy Charter is up for review

Vremya Novostey recalls that "the latest Russia-EU summit took place at a time of not simply a local crisis in relations between Moscow Brussels, as we've seen a number of times in recent years, but an overall breakdown. The two sides not only have completely opposite views on a range of key issues concerning the development of cooperation, security and energy supplies, but are also clearly lacking any understanding of how to get out of this situation. What is there to talk about if the official agenda for the summit does not include such vital topics as drawing up a new agreement on partnership and cooperation or mutual action in the area of gas, and there was not even any intention to sign a joint communiqué?"

The RIA-Novosti agency notes that "Russia and the EU drew up some proposals for the Khabarovsk meeting that were new but reflected little agreement. Russia proposed a `conceptual approach' which was supposed to replace the Energy Charter; the EU a new energy strategy and early warning system which were a continuation of the Energy Charter. They parted as they met."

Nevertheless, says Kommersant, the results of the summit "were more positive than expected. This time the Europeans declared that many of the Russian proposals merited discussion."

Nezavisimaya Gazeta agrees: "The main result of the forum was that Dmitriy Medvedev managed to convince his EU colleagues of the need to review the Energy Charter, which the Russian side believes does not meet today's requirements. For example, this document is incapable of averting situations such as the one that occurred in Ukraine in the winter, during the gas crisis. And the Europeans still shudder when they recall the consequences of the crisis that broke out during the most intense frosts."

Many media outlets quote the tough statement by President Medvedev regarding guarantees against the possibility of new interruptions in gas supplies to Europe: "Russia has given no assurances, nor will it give any. What's the point? On our side there are no problems; everything is in order as far as the gas and our fulfilment of our obligations is concerned. Let those who are responsible for paying for the gas give assurances."