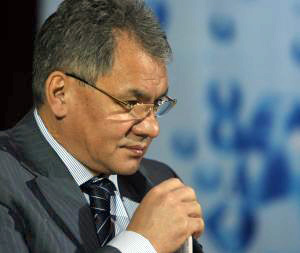 A new law proposed by Emergency Minister Sergei Shoigu will equate such statements to rehabilitating Nazism, which will in turn further complicate Russia's relations with its pro-Western neighbours and interfere with the work of World War II researchers in Russia.

Following the collapse of the Soviet Union in 1991 some of the former-Soviet republics adopted a pro-Western stance, broaching a number of controversies surrounding various interpretations of the events that took place on the eastern front during the war. Latvia, Estonia and Lithuania have become known for popularising anti-Soviet sentiments. Latvia has allowed SS veterans to hold official marches, and Lithuania outlawed the public display of Soviet symbols, equating them to those of Nazi Germany. During Victory Day celebrations last year, Ukrainian President Viktor Yushchenko praised the Ukrainian Resurgent Army, which fought against the Red Army and has been accused of collaborating with the Nazis.

Moscow has repeatedly expressed disdain for such actions and statements, speaking out against the rehabilitation of Nazism and protesting the removal of Soviet war monuments from former Soviet territory, most notably that of the Bronze Soldier in the Estonian capital of Tallinn. But now, buoyed by the wave of patriotism in what is presently seen as a resurgent country, Russia has decided that it has had enough.

Three days before Victory Day, United Russia deputies proposed anti-denial legislation, with Shoigu acting as the lead architect. This time, the crime was defined as rehabilitating Nazism. Those found guilty would face heavy fines and up to three years in jail (up to five years should they employ media outlets to spread their soon-to-be-illegal ideas). The bill could be adopted as a new article in the Penal Code as soon as late June.

But one doesn't have to literally try to rehabilitate Nazism to be punished. Should the proposed bill be passed into law, punishable offenses will include approving Nazi Germany's actions during the Second World War, labelling the actions of the allies against the Nazi aggressors as "criminal," and "belittling the role of the Soviet Union in the anti-Hitler coalition."

"Those trying to turn everything upside down and portray the Nazi liberator states as invaders have to suffer punishment," RIA Novosti quoted Valery Ryazansky, a United Russia deputy and one of the law's sponsors, as saying.

This law will not only apply to Russian citizens on Russian territory, but to foreign citizens as well, who will be declared persona non grata if found in violation of the law. Even former Soviet republics could suffer the consequences if they challenge Russia's interpretation of World War II history - their ambassadors will be banished and all diplomatic relations will be severed.

The well-publicised bill enjoys widespread support among Russians. The state-owned VTsIOM polling agency reported that 60 percent of those polled were in favour of outlawing the denial of Soviet victory in the Great Patriotic War.

On the military side, Russia's victory over Germany can hardly be challenged, albeit with due credit to the allies who opened a second front in Western Europe and provided the Soviets with much-needed supplies. Two years ago, Defence Minister Anatoly Serdyukov declassified some wartime documents stored in the Defense Ministry archives. But it is difficult to conduct the battle against the dreaded revisionists thorough historical research.

"I would not recommend banning or prohibiting anything. In the words of Mao Zedong, let all flowers bloom. I don't think of people as too stupid to figure everything out on their own," said Alexei Isayev, a writer and military historian. He cited the example of another historian, Valery Zamulin, who was fired from his job at the Prokhorovka field museum for writing that there were less than 1,200 tanks on the field during the battle. "This is a rather obvious fact, but he suffered consequences since he studied the Kursk battle more thoroughly than anyone else. These prohibitions will harm those who try to conduct historical research," Isayev said.

The chain of events that followed the war has caused heated debate in post-war Europe. The Soviet forces did not exactly go home after liberating Eastern European countries from the German army. The Soviet Union annexed the three Baltic States and installed puppet Communist regimes in other countries where it maintained a presence. The Soviets became the dominating power in the region, surrounding themselves with a multitude of "friendly" countries that would act as a buffer with the West. Today, the view of the Soviet Union as an occupying power that stripped countries of freedom and the opportunity to evolve as independent states is widespread in Eastern Europe. But productive discussions on the issue will now be difficult to hold.

But the Russian population stands united in its positive attitude toward the Soviet role in Eastern European history. VTsIOM conducted another poll, asking Russians whether they believe that the Soviet Union freed Eastern European countries from Nazi occupation, enabling them to live freely and develop, or if the Soviets basically replaced one totalitarian regime with another. Seventy seven percent of those polled agreed with the former.

Judging by VTsIOM's polls, the majority of the Russian population is clearly in favour of outlawing the denial of the Soviet victory, but it also found that those younger and with a higher level of education were more likely to dissent. Fifty percent of respondents younger than 44 supported criminalizing challenges of the Soviet victory, while for the older generation this figure was over 70 percent.

Fourteen percent of those with higher education condemned the Soviet occupation of Eastern Europe, but they were joined by only 7 per cent of people who claimed lower levels of education. "This is not a majority, but you can see a trend," Olga Kamenchuk, VTsIOM's communications director, said at a news conference last week.

The new legislative measure that State Duma deputies believe will prevent the Soviet Union in the Second World War from being "belittled" will put further strain on Russia's relationship with its immediate neighbours. But one positive influence it could have would be attracting public attention to the war, and sparking some interest in the younger generation that so far shows little interest in the country's history. "Sadly, we have to admit that the awareness of the war is dwindling. The younger our interviewees are, the less they know about the war. Most Russians couldn't even tell what year the siege of Leningrad was lifted," said Kamenchuk.