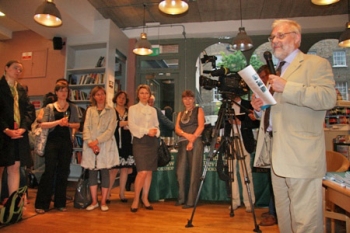 At 8pm on Monday 25th of May 2009, day of Saints Kyril and Methodius, during the award ceremony at the London Review Bookshop, Amanda Love Darragh was announced winner of the Rossica Prize 2009. Shortly afterwards, James Rann, postgraduate student at SSEES, received first prize in the inaugural Rossica Young Translators Prize. Well attended by publishers, translators, writers, members of the press and many influential figures in the academic world, the evening was an enjoyable and memorable affair.
The judges expressed their gratitude to publishers, translators and organisers alike for the impressive number of entries, and the range of literary works submitted. They stressed how difficult it had been to decide on a shortlist of seven given the sheer quantity and diversity of different titles.

Special commendation went to Kyril Zinofieff and Jenny Hughes for their translation of Tolstoy's Anna Karenina, published by One World Classics in 2008. Robert Maguire was also specially commended for his translation of Dostoevsky's Demons, published in 2008 by Penguin.

The prize, of £5,000, awarded for the best translation published in 2007 or 2008, was shared between the translator Amanda Love Darragh and the publisher Glas.

"This exercise has been challenging, exciting, and bodes well for the future of Russian literature and Russian studies in English speaking countries." - Professor Robert Porter.

Amanda Love Darragh's translation was published by Glas in 2008.

The central theme of "Iramifications" is the eternal misunderstanding between East and West. Misconceptions and the notion of identity are explored on a journey from Odessa to the symbolic Oriental city of Iram, via the complexity of friendship and the blurring of borders between fantasy and reality. Tales are woven, deserts are crossed, and battles are fought. East and West are worlds apart...or are they? A resourceful shuttle trader from present-day Odessa tricks a tourist from St. Petersburg into joining him on a business trip to Istanbul. The pair are cheated by their Turkish partners and give chase, becoming inadvertently embroiled in the theft of a precious stele from the local ethnographic museum. In pursuit of the robbers, the companions are transported back in time to the mythical city of Iram, where they are drawn into a world of dangerous court intrigues. Iram itself evokes the exoticism of "The Arabian Nights", and the adventures that take place there are reminiscent of Mark Twain's "A Connecticut Yankee in King Arthur's Court".

Eventually the hapless traders return to Odessa and the whole trip would seem to have been a bad dream, were it not for the presence of a certain white camel.The novel abounds in various references to the Bible and the Koran, to Sufi parables and European occult history, which mix happily with the contemporary vernacular of the main characters, whose relationship is the key element linking all of the book's settings and events.