Finding a career outside Moscow 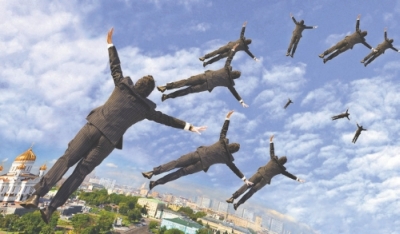 Want to earn more money and spend less? Move out of Moscow!

Job migration patterns have changed thanks to the economic crisis. The lure of "a better life" in Moscow was overpowering for most Russians. According to the research center at SuperJob.ru, a third of metropolitans would prefer relocation, against 15 percent two years ago.

Moscow has always been the ultimate draw for young people from the provinces, but a new trend is emerging.

Native Muscovite Andrey Stepanov, 28, has lived in Yekaterinburg for about two months. An estate agent who was laid off in the capital, Stepanov tried to find a job in Moscow, but then saw a vacancy in a Yekaterinburg company. Now his salary is around $1,100 per month, close to his monthly income in Moscow. His rent was $760 in the capital. It's $443 in the Urals.

Stepanov is going to "wait out the hard times" in Yekaterinburg. As soon as the situation gets back to normal, he will return to Moscow, and given the prices in Yekaterinburg, he could easily have around $10,000 in savings. Stepanov commented: "They say Moscow is `a state within the state,' while Muscovites are thought to be an absolutely different kind of people from the rest of the nation. That is why I made up my mind, while I am young and single, to find out what life is like down there."

"There are a lot of peer cities in Western countries, while Moscow remains the center of gravity for the Russian economy," explained Sergey Smirnov, Director of the Institute of Social Policy and Socio-Economic Programs, State University, Higher School of Economics. Smirnov believes the regions can offer more career opportunities, and the economic downturn has made Muscovites consider jobs and careers elsewhere.

Smirnov also said professionals from the capital could climb the career ladder faster outside Moscow. Additionally, relocation might be the only chance to find a job using their qualifications. In the light of widespread job losses, competition for available positions has increased. Those who are not ready to put up with a lower salary or position simply have to seek new opportunities outside Moscow.

Psychologist Pavel Ponomaryov recalled that an acquaintance moved to Smolensk. "Before, he used to be the director of a Western IT-company subsidiary in Moscow. He then realized that Moscow was saturated, and the regional markets presented untapped potential. Since his services are in enormous demand in Smolensk, he has chosen to start a new company there despite the economic downswing."

Chronic stress is another reason Muscovites flee the capital. "Many office workers in Moscow are living under constant pressure: they fear redundancies and tend to take pay cuts hard," said Ponomaryov. "Crisis victims in Moscow might feel they are unwanted and unsuccessful. The provinces offer them a real chance to boost self-esteem."

The psychologist jokes: "If you have 10,000 rubles [$315], you could feel like a financial tycoon in a small town. A capital citizen might enjoy being a big fish in a small pond."

The SuperJob.ru survey reveals that relocation for 25-40-yearolds has become increasingly popular.

"This is the time when people from Moscow are willing to settle in the manufacturing or agricultural sectors," said Andrey Ustyuzhanin, General Director of the Expert Recruitment Center. "These industries are lacking a qualified workforce. Vocational training has been unavailable for a long time there and the agriculture and manufacturing careers were considered an attractive option by graduate jobseekers."

Alina, 31, is a stylist. In December, the beauty parlor she worked for closed. Three days after she put her resume online, she was offered the position as personal stylist to a local businessman in Nizhny Novgorod. While in Moscow, she earned about $1,600 per month, now she rakes in some $2,500. "He boasts that he has summoned a specialist from the capital," she said.

Another reason to move is housing prices. Six months ago, the more adventurous rented out their apartments and set off for Goa or Montenegro to live off the rental income. The current trend, though, is to go to Saratov rather than India. "By leasing out an apartment in Moscow, they obtain two sources of income. As a result, one can build up a handsome fortune over several years," said Smirnov.

Experts believe the number of those who rule out living in Moscow may well increase. While the Russian government promises to support citizens who have suffered from the economic crisis, particularly by developing a relief program for internal job migrants, it is still unclear what financial help will be offered and when the program will be launched.