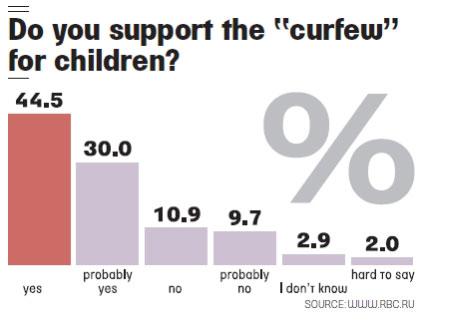 President Dmitry Medvedev supported the new law allowing local authorities across Russia to sweep youngsters off the streets - and extended the upper age limit from 14 to 18.

Officials in Volgograd have already announced plans to impose the new curfew law - in whole or in part - on their youth.

Is it possible that Moscow, boasting the nation's liveliest nightlife, could join them?

The law gives regional authorities the power to bar unaccompanied minors under 18 years from some public places, such as, "in the street, stadiums, parks, squares, public transport and Internet cafes" between 10:00 pm and 6:00 am.

Youngsters under 18 will also be barred from nightclubs, licensed premises and sex shops, even though the age of consent in Russia is 16. Individual authorities can add their own hit list of places damaging the "physical, spiritual and moral development" of children.

While officials believe the new legislation will curb crime and keep kids safe, not everyone is convinced.

Nadezhda Lisistsina, first regional commissioner for the Rights of the Child, told reporters at Regnum.ru that the law was futile without close communication between police, social services, education and health systems.

She highlighted the risks faced by young people, who are often the victims of crime, but also pointed out that crime committed by minors has fallen in recent years.

"There is a relevant question about the rights of minors," she said, adding the any application of the new legislation would need to "more actively engage the state and society to minors."

But Andrei Popkov, a deputy in the Volgograd Regional Duma, believes the curfew is the way forward.

"This will, firstly, reduce the level of delinquency among adolescents, and, secondly, will reduce the negative impact of street youth," he told Komsomolskaya Pravda.

Vox pop
Alisa Hozina spoke to teenagers in Moscow and found that the youngsters who are supposed to stay inside don't like the idea of a curfew.

Katya, 17: "They are talking about stopping teenagers from taking drugs, smoking and drinking, but the funny thing is that the more you limit people, the more they want to do forbidden things. Sitting outside laughing is much better than spending nights hanging around in stuffy doorways irritating old ladies. Most of us just think it's another useless effort that shows the government's inability to stop crime. People who get into trouble will find a way to do so anyway."

Andrei, 16: "I don't really care, though I don't think it is an escape from the situation. The police should guarantee our safety and protection all day long. Now, instead, we are about to bring up a generation who will be running away from government until they are 18."