Prianiki: a sweet teatime snack to soothe the soul 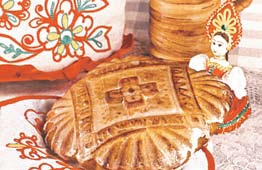 Russian prianiki became a veritable art form, centered in the town of Tula, south of Moscow

They improve your mood and give you a more positive outlook on life; both are believed to have remarkable medicinal properties, recommended as a folk cure for everything from bronchitis to boils, and it would be unthinkable for most people to drink either without a zakuska (snack). But here's where the similarities end: While a fiery shot of vodka is most commonly chased with something pickled, a warm, reassuring cup of tea requires something equally comforting, and that's where the prianik comes in.

A prianik is a gingerbread cake often served at the side of your teacup. The simpler ones look like thick cookies coated in white frosting, while more elaborate varieties, like the famous Tula prianiky, come as loaves and are often stamped with a wooden press to produce elaborate surface decorations.

Only in the last century has the prianik been thought of as merely an ideal tea accompaniment. In olden times, they were an indispensible part of every festive occasion, baked for births, holidays and weddings. Traditionally, a newly married couple took a prianik to the bride's parents several days after their wedding. Prianiki were in such high demand that they even became a profession - prianishniki were respected craftsmen who passed secret family recipes from one generation to the next.

For reasons unknown, Tula, a half day's drive from Moscow, became the prianik-making capital of Russia. Here, in the 17th and 18th centuries, the best prianshiki brought the art form to its apogee, creating prianiki of every conceivable shape. The famous Tulsky Pryanik museum still stands in Tula today.

Enjoy this classic pryanik recipe, straight from the museum's books. And don't forget that cup of tea!

Preparation
For sugar syrup: Bring the water to a boil. Dissolve the sugar into the boiling water. Once the sugar is dissolved completely, remove the pan from the heat.

Dough
Add melted honey, butter, baking soda and cinnamon to dough, knead as necessary.
Sprinkle flour on a flat surface, then roll dough to a thickness of no more than 1/3 inch.
Cut dough into rectangles.
Spread a generous tablespoon of jam into a rectangle of dough, then cover it with another rectangle, sealing the edges to prevent leakage.
Put on greased baking sheet and bake for 10 minutes at 350 degrees F.
Bake for 5-10 more minutes at 325 degrees.
Glaze with sugar syrup when cool.