Out of Putin's shadow? 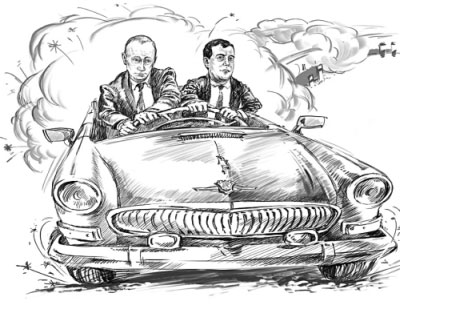 For 365 days he's been learning how to be head of state. He's been looking for his own style, his own language, his own intonation, his own vision of Russia's future.

One of them by his own admission "grew up on the streets of Leningrad," and Putin put it even more bluntly to his interviewers in the book "First Person." "I wasn't a Young Pioneer, I was a hooligan... I was a real hood."

In contrast, Medvedev didn't even take part in childhood games in the sandpit, and always "came home as clean as he was when he went out." Medvedev had an aunt and a grandmother in Voronezh, and his mother often took him there. His aunt's friend Natalya Kroychik described him to journalists as immaculate; that's how she remembered the future third president of Russia.

And although both men got their legal education at Leningrad University, they studied there at different times and their lives took quite different courses after university. It's well known that Putin studied law in order to become an intelligence officer. This was right at the end of the 1960s, when the period of political stagnation in the USSR was just beginning to set in.

Medvedev entered the law department in the 1980s. He didn't have a specific aim in mind, he just wanted to be a lawyer. And he grew up on bands such as Black Sabbath, Led Zeppelin and Deep Purple.

Finally, while Putin rose to the highest government post to the accompaniment of his own threatening and belligerent retort about "rubbing terrorists out in the outhouse", Medvedev's ascent was accompanied by his peaceful and humanitarian phrase, "Being free is better than not being free."

So when it became clear that the "Petersburg legal eagle" was going to replace the "Petersburg KGB mole" as President of Russia, many people expected changes. No, not revolutionary changes, and no shocks - from the start Medvedev identified himself as continuing "Putin's work" - but at least some purely stylistic changes. But they were a long time coming.

The new Russian President's speeches were very reminiscent of those of his predecessor, in terms of their content, their style, and even their intonation.

Of course, this was not a matter of conscious imitation. It was just that the magnetic pull of Putin's strong political personality was exerting its force.

This scion of a professor's family was unwittingly reproducing Putin's brutal lexicon. Moreover, life itself conspired against a change of style.

When military conflict broke out in South Ossetia in August 2008 Medvedev was not really up to niceties of language. The situation demanded decisive actions and "a voice of steel." The new president coped with his role of supreme commander, but this is not a role suited to "innovation," and Medvedev stuck to the tradition established by Putin's eightyear rule.

Then military conflict was followed by an economic conflict which has become a tradition: a stand-off with Ukraine over gas. Here too, Medvedev had no time for new approaches. Any special variations would have clashed with his established duet with Prime Minister Putin.

This duet has not broken down: They're still in unison. But with the arrival of spring Medvedev has started to allow himself a few unexpected solo performances. Notes have started to sound in his repertoire that are not characteristic of his partner in power. This happened when Dmitry Medvedev gave an interview to Dmitry Muratov, editor-in-chief of Novaya Gazeta, a newspaper which distinctly and manifestly takes an opposition stance and which has been criticizing the government for years, to put it mildly.

The president didn't make any sensational statements in the actual interview. Strictly speaking, he didn't say anything new at all, but stuck to his maxim "Being free is better than not being free." But the very choice of newspaper for his interview was blatantly "moving the stylistic goalposts."

"Style is the man," goes the well-known saying. But style is only the form, the outward appearance. The most important thing for the president is not words but deeds. Actions. Decisions. And in this respect Medvedev is simply continuing Putin's line.

It's extremely difficult to regard many of the head of state's routine decisions as revolutionary. For example, the tabling of an anti-corruption bill in parliament, or the high-profile dismissal of Moscow city's head of internal affairs after a high-profile scandal in the capital's police department, or the cosmetic repairs to the electoral laws.

Thus one can say that a year after his inauguration Dmitry Medvedev has partly emerged from the shadow of Vladimir Putin. However, the differences between Russia's two rulers are still purely a matter of style.

Nikolay Troitsky is a Russian journalist and publicist