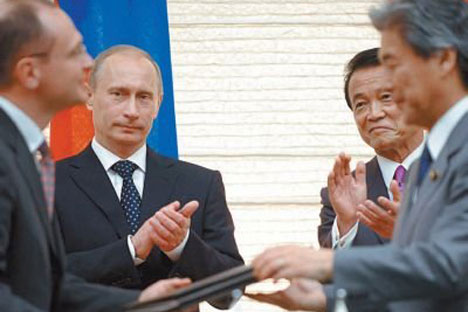 On a recent visit to Japan, Russian Prime Minister Vladimir Putin secured a bilateral civil nuclear energy agreement for the next 25 years, as well as several energy deals aimed at attracting investment

The International Association of Business Communicators recently completed a major study of how Russia is viewed by foreign media and big business. Contrary to expectations, many foreign investors remain bullish about the country's prospects during the economic crisis.

The group examined articles about Russia appearing in various international publications between January 2006 and December 2008, and conducted more than 35 in-depth interviews among representatives of think tanks, major businesses, financial groups and the press. Participants included the Economist Intelligence Unit, Coca-Cola and Business Week (commentaries were provided on a strictly anonymous basis).

The results following the start of the global economic crisis demonstrated that many private investors were not as pessimistic about Russia's prospects as the media. One respondent went as far as to say that "the crisis isn't economic, but virtual. A lot of the middlemen have disappeared, and therefore it's become easier for our [foreign-owned] company to work in Russia, as it has for many others."

There was also mention of Russia's "potential" among the respondents, some of whom believed that even the country's lack of a strong transportation infrastructure was a plus that created a massive opportunity for investment. Other advantages that Russia shared among the so-called BRIC (Brazil, Russia, India and China) developing economies included natural and human resources, geographic location and a cultural closeness to Europe. One respondent commented, "each one of these four have different features: I can't say Russia or China, who is number one or two in different factors. It depends on what type of investors will go in."

However, the study also showed that the same problem long faced by investors in Russia remained: endemic corruption (Russia was placed 143rd in Transparency International's last study) and a "tardiness" in implementing market reforms and opening up to foreign markets. One investor remarked: "Among the BRIC emerging markets, Russia is last because of its poor infrastructure, high level of corruption... and strong dependency on food and consumer imports."

Perhaps most worrying for advocates of Russia's economic diversifi cation was a consensus that it would remain a raw materials exporter to western Europe until the latter diversified into alternative energies. For Europe, investors stressed, Russia is both a provider of oil and gas and a huge consumer Market

However, many respondents also mentioned that the path out of the crisis involved tapping Russia's colossal potential, including entering the World Trade Organisation, lowering administrative barriers and taxes and modernizing the economy to focus on innovation. Foreigners saw the greatest potential in the information technology, telecom, nanotechnology, agriculture, military, infrastructure and housing segments of the economy. They also mentioned the great potential of Russian regions, where investors enjoyed strong local support, while emphasizing that Moscow remained the best place for a high return on investment.

The biggest surprise of the study was the large divide between the opinions of businessmen and investors and those of the media and major international organisations. Professionals working in Russia remained considerably more optimistic about the country and were more critical of how Western - particularly British - media portrayed the situation. They none the less emphasized that, during Russia's current economic crisis, the gap between" image" and"reality" was getting smaller.