The embodiment of joy and beauty 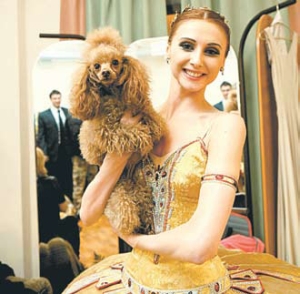 If there is one thing that Russia and Ukraine can celebrate together, it is the singular beauty of Svetlana Zakharova, the star of the Bolshoi Ballet

The Bolshoi Ballet's prima ballerina appeared this April in a world premiere named for her: Zakharova "Super Game." In this one-act ballet with choreography by Francesco Ventriglia, Zakharova played a computer character, racing about a virtual space with an automatic gun. Its name suggests the dizzying turns in the brilliant career of Svetlana Zakharova, 30.
Zakharova was born in Ukraine, in the small provincial town of Lutsk, daughter of a military man. As a child she became an accomplished swimmer, gymnast and folk dancer. When she turned 10, her mother took her to the capital and enrolled her in the Kiev School of Choreography. "With that my childhood ended," says Zakharova. "I can still picture it now: I, a little girl, am standing on a second-floor balcony of the boarding school watching my mother leave on the evening train. She's crying, I'm crying..." In 1995, after six years at the Kiev School, Zakharova entered the Young Dancers' Competition (Vaganova-Prix) in St. Petersburg. The youngest contestant, she took second prize and was invited to continue her training at the illustrious Vaganova Academy.

This was the first abrupt turn: the product of another school, Zakharova was not only accepted to Vaganova (ordinarily closed to non-Russians), but invited to skip a year. Her ideal proportions, extraordinary footwork and ideal lift so astounded the judges that she went straight into the graduating class at the academy.

From the Mariinsky to the Bolshoi

As with everything else, Zakharova joined the Mariinsky Ballet ahead of time, at age 17. A year later she was promoted to principal dancer. One stunningly successful assignment followed another, ranging from great classical roles like Giselle, Odette-Odile in "Swan Lake", Aurora in "Sleeping Beauty", and Nikiya in "La Bayadère," to such modern works as Balanchine's "Serenade", "Symphony in C" and "Apollo" as well as Mac-Millian's "Manon" and Neumeier's "Now and Then".

In 2003 Zakharova was invited to join the Bolshoi Ballet as the first principal dancer of the great classics. Rehearsing her roles with Ludmila Semenyaka, a star ballerina from the previous generation, Zakharova continued her meteoric rise. Among her many prizes, she received the Benois de la Dance for her performance as Hippolyta-Titania in Neumeier's "A Midsummer Night's Dream" and the Soul of Dance award from the Russian Magazine "Ballet". It is now clear to critics and choreographers alike that Zakharova is a unique phenomenon in the world of ballet, too extraordinarily gifted to blend into the crowd. Critics compare her instrument - a body of astonishing beauty - to the ideal violin, the Stradivarius. In addition to her many gifts, she has absolute mastery of all the subtleties of classical dance as well as fantastic coordination.

A Change of Image

With her reputation as a classical ballerina firmly established, Zakharova might easily have spent the rest of her professional life dancing romantic leads. But she evidently felt confined by the classical roles with which the Bolshoi invariably opened its tours abroad. Her irrepressible energy kept searching for new turns and new types of choreography. And suddenly the "ideal Balanchinistka, the dancer of exultant joy" found a new twist: the magnificent abstraction of William Forsythe. Zakharova threw herself into a duet from "In the Middle," dancing the piece with dizzying abandon and speed that she made look natural and organic. The reviews were all raves, the decision unanimous: Zakharova was the ideal performer of Forsythe's incredibly complex opuses.

But Zakharova did not stop there. Throwing herself into modern dance, she now composes programs entirely devoid of classical choreography. She is changing her image from that of a classical ballerina and mastering avant-garde plasticity. Is anyone capable of dancing several premieres in a single evening? Zakharova is. She dances barefoot and on point; she balances on the back of a chair in the acrobatic "Revelation" by Japan's Motoko Hirayama and graphically traces the clean lines of the poses in "Magrittomania" by Yuri Possokhov. She gives herself entirely to her work with Kshishtof Pastor, a Polish choreographer who arrived from the Netherlands and is in demand in the West. The result is a fragment of the bitter theme from Tristan and Isolde together with the solo "Voice" from the ballet "Body"- an amazing tightrope act on point.

One might suppose, of course, that mastery of various roles and styles is typical of the new type of ballerina. But this is not the case. Zakharova lives at the intersection of eras and passions. She jets around the world, dances on the stages of the best theaters, appears as a guest artist with many companies: the Paris Opera, the New National Theater in Tokyo, the Roman Opera, La Scala. And she has not abandoned her classical repertoire. Last season she reprised her role as Medora in "Le Corsaire", where her magical legs so suit the old-fashioned choreography. And she once again danced the Queen of the Dryads (Kitri) in "Don Quixote", stunning the audience with her steely aplomb, the abundance of her crystalline technique and her rapidfire double fouettés.

Last year Svetlana Zakharova was the first Russian ballerina to be accorded the title of "star" by the La Scala ballet troupe. With La Scala's Roberto Bolle she danced "Giselle" in Moscow. They made an extraordinarily beautiful pair and set a new standard for the duet: tall, perfectly formed, with ideal technique, "wise" legs and an impeccable sense of poses. Giselle froze in suffering arabesques and flew about the stage like a light-winged shadow - Zakharova built her story of Giselle around the tragic theme, the ability to love and forgive. But no matter who she partners with, Zakharova is invariably seen as an exponent of the Russian school of classical dance. A world-famous ballerina, she lives and works in Moscow. She knows what it is to be professionally overloaded, but is happy.

The Bolshoi Ballet will tour the U.S. June 4-20, beginning in Zellerbach Hall, Berkeley, CA, continuing on to Chapel Hill, NC (Memorial Hall), and winding up at the Kennedy Center, Washington, D.C.

Svetlana Zakharova danced the premiere of the revival of Carmen Suite, choreographed by Cuba's Alberto Alonso. Maya Plisetskaya herself recommended Zakharova to dance the lead. Plisetskaya originated the role in 1967, making her an international star and marking a turning point in the history of the Bolshoi Theater.

When staging benefit performances, Zakharova insists on one thing: ticket prices should not be astronomical. "I want the audience to include people who love ballet, not just those who can afford tickets costing incredible sums," she said. And indeed, the prices for tickets to her last benefit were a third of those charged for other benefits.

The legendary Mikhail Baryshnikov also played an important role in Zakharova's success: "On one of my first visits to France, Baryshnikov asked the board of directors of the Paris Opera to pay attention to me. And he gave interviews in which he spoke warmly of me. Several years ago when the Bolshoi was in New York, Baryshnikov came to my performance of "Don Quixote." Afterwards, he invited me and my teacher Ludmila Semenyaka to dinner. He made several criticisms and suggestions as "Don Quixote" was one of his own most striking performances. I listened closely and tried to remember every last thing he said."

"Nature endowed Svetlana Zakharova with everything a girl dreaming of ballet could want; it modeled her according to the canons of a classical beauty, in which all gifts required for a perfect dance are organically interwoven. So what is Svetlana Zakharova? Perfection? For some, yes. But perfection has one drawback: the dryness of the limit. That is how it sometimes seemed to me, especially in classical ballets. And suddenly, working briefly with Svetlana changed my idea of her - of the actress. I felt the inner churning of her emotions and the lively beating of her heart. In an adagio from the ballet "Macbeth", Svetlana was for me a joyous revelation."
Vladimir Vasiliev, Former head of the Bolshoi Theater

"In ballet there are rare moments of discovery when you realize an astonishing new talent is before you. That is what happened when I saw Svetlana Zakharova in "Giselle" at the Coliseum Theater in London.
She emerged, beautiful and graceful, and took a few steps across the stage to meet her lover. And she was Giselle."
Clement Crisp, Dance critic, July 2001