BRIC: on the road to recovery 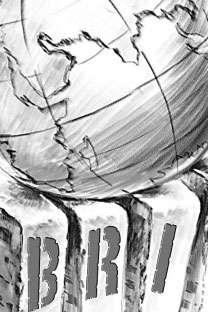 Chances are the biggest developing economies, Brazil, Russia, India and China (BRIC), will be among the first to recover from the current financial downturn, and will gain a firmer foothold in international financial institutions and the global economy. That is assuming that the worst is already over, and the crisis was caused by irregularities of the global financial system - not the obsolescence of the current economic model based on the international division of labour principles. According to estimates by the China Institute of Contemporary International Relations (CICIR), the following three types of economies will be most affected by economic meltdown: raw material, export- oriented countries and nations with overly open financial systems. BRIC countries clearly fall under the former two definitions.

Pegged to raw material exports, the Russian economy is suffering from shrinking demand for oil and gas, while China, India and Brazil are upset due to the global trade contraction (11 pc expected this year). In fact, Chinese exports were down by 30.9 pc in the first quarter of 2009.

Still, many experts tend to believe the developing economies, notably the BRIC countries, will recover earlier and in better condition than many developed nations. In this context, India and China look particularly promising, with the latter standing out not only in the developing world, but in the global economy as a whole. The industrial potential and magnitude of its internal market add Chinese muscle to the raw material game. Moreover, China, as the main creditor and trade partner of the United States, leaves an observer in no doubt as to who is gripping the control lever of the global financial system, i.e. the US dollar.

Owing to accumulated industrial potential, India and China will become the main drivers of the world economy this year. "In the current year, global economic growth will be driven by developing nations, and China will account for at least 70 pc of this growth," said Fengying Chen, Director of the Institute of the World Economics, part of the China Institute of Contemporary International Relations (CICIR), during a Moscow-Beijing video conference convened by RIA Novosti.

In general, Chinese experts are confi dent that the Celestial Empire has left the peak of the crisis behind.

In fact, November 2008 was the lowest China has dipped. At that time, economic growth was a mere 6.1 pc, but in the second quarter of this year the national economy may grow by 7 pc, gaining a further 1 pc each subsequent quarter. Consequently, with annual GDP growth at about 8 pc, China will be the first nation to pull out of the global fi nancial crisis. Apparently, this does not appear ill-founded. Reshaping of global markets suggest the hardest part of the economic downturn is over. The global WTI oil prices rebounded by 85 pc from a long-time record low of $32.4 per barrel in December 2008 to $60 per barrel by mid-May 2009. Ms Chen feels positive about growth prospects; she forecasts that American oil will reach $80 per barrel by the end of this year. As for the stock markets, Chinese analysts believe equity markets will see investors return to China. After an historical plunge in November, the national stock market shows a 62 pc comeback.

If it is true, the crisis offers BRIC countries the opportunity to assume a more important role in the world economy, extend their presence in global markets and attract foreign investors and technology. All these questions were on the agenda during the St Petersburg International Economic Forum, June 4 6. Sergey Aleksashenko, Director of Macroeconomic Research at the Higher School of Economics and former First Deputy Chairman of the Russian Central Bank, believes that Russia, China, India and Brazil should "head the process of strengthening the IMF in monitoring the global macroeconomic situation". Lev Freinkman, an economist, hopes the crisis will provide opportunities for reforming the world trade infrastructure for the benefi t of the developing world.

Regardless, pessimistic arguments might sound as strong as optimistic ones. Pessimists reason that the present rally in the stock markets (including Russia and China) can be put down to a shift in fi nancial speculation direction rather than positive fundamental developments. Similarly, the heating up of oil prices can be explained by OPEC's manoeuvring and speculators' moves, rather than real economic demand. At the same time, the actual obsolescence of the existing economic model is denounced by a number of Russian and international economists for being a fundamental reason for the global fi nancial turmoil. Should the naysayers be right, the economy might take an exceptionally long time to recover, if for no other reason than all anti-crisis measures instigated by the global community are aimed at preserving this very model.