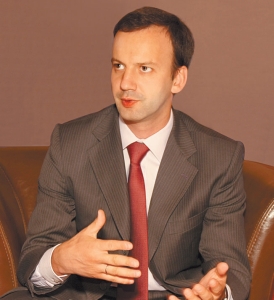 Arkady Dvorkovich: it's about cooperation.

Analysts have opposing viewpoints about Bric. Some say Russia and China want to take advantage of the international crisis in order to "push aside" the USA; others think the new venture will come to nothing, the interests of the countries involved being too diverse. In an interview with Russia Now, Arkady Dvorkovich, aide to the Russian president, shared his views on the prospects for Bric countries.

Why does Russia need Bric when it's already a member of the G8 and the G20?

States as important as Brazil, Russia, India and China should have the opportunity to relate to each other in a wide variety of contexts. The availability of various venues makes it possible to draw up joint stances on a wide variety of issues, to reach agreement in broader gatherings and to develop cooperation with each other. This is not about taking an opposing position, but about trying to add to the existing formats.

Bric, which stems from our countries' potential and their contribution to the growth of the global economy, is also a convenient way of working together. There are certain advantages in having just a few countries taking part in a dialogue, as it becomes more open and specific. Bric provides a framework for working out common approaches to issues concerning the development of the global financial architecture and of the world economy as a whole. We can also discuss a wide range of issues concerning cooperation between our countries - in energy, agriculture and high technology.

The first summit has shown that the four states that make up Bric have an opportunity to find common principles for tackling various issues, and our joint proposals could become a serious basis for discussion in wider contexts.

What are Bric's proposals for changing the world's financial architecture essentially about?

The partners came up with ideas about investing part of their reserves in national currencies, and also about reforming the international financial institutions with the aim of increasing the resilience of the global exchange system. We have similar positions on this; of course, there will always be nuances, but our positions are very close.

Is there any truth in the idea that the Bric states intend to move part of their reserves out of dollars and into their national currencies?

The discussion was about how the system will develop in the future. There will be room for all currencies - the dollar, the euro, the pound, the yen, and the Bric countries' currencies. Naturally, the four countries' monetary units will not play a very big role in the international exchange system straightaway. That role will depend on the state of our economies, our credit status, and the state of the financial markets. It will be small to start with, but we expect the world economy to grow overall. It's a matter of how that growth will develop. No one's planning to take anything away from anyone else. It's about the gradual, evolutionary development of the system.

How will competition between members of the group be addressed?

Competition in specific sectors is no obstacle to the development of partner relationships overall. In all areas there is the potential for competition, but also the opportunity to develop pragmatic economic relations and to identify interesting projects and mutual interests. This concerns both global dimensions of the economy, such as finance, and also any specific industry one cares to name. One example would be the discussion between Brazil and Russia concerning aircraft construction. We've been having a dialogue with our Brazilian colleagues for some years about regional aircraft. Brazil has the Embraer company, which builds aircraft in this category, and Russia recently launched its own Superjet project. They are competitors in one sector of the market, but Embraer also produces other planes with a different seating capacity, and here there is the potential for partnership rather than competition.

When will the "new four" be able to overtake the G7?

There's no point in comparing "the four" with "the seven". It's not a matter of trying to catch up with or overtake anyone. The relative weight of the countries will change gradually. Bric's role will grow, but it's still premature to talk about the point at which they might intersect. For example, if we take GDP calculated in Purchasing Power Parity, the Bric countries together already outstrip the economy of the USA.

Is it possible to talk of some kind of division of roles between the four?

No, our countries have a wide range of possibilities. Russia has not just raw materials but also a wide spectrum of interests in other areas, including advanced technology. In Yekaterinburg, for example, there was discussion of modern power engineering, including nuclear energy. This is not a raw material; it's a hi-tech industry with export potential. The meeting also discussed the development of agriculture and the food market.

All four countries' economies have both raw materials and technological elements, and they are all working to strengthen the latter.

RN Dossier
Arkady was born on March 26, 1972 in Moscow. In 1994, he graduated from Moscow State University and the New Economic School with a degree in economic cybernetics. In 1997, he obtained a Masters degree in economics from Duke University (USA).
Between 1994 and 2001, he was adviser to and then head of the Economic Expert Group of the Ministry of Finance.
In 2001, he was appointed Deputy Minister of Economic Development and Trade.
From 2004 to 2008, he was Head of the Presidential Experts' Directorate of the Presidential Executive Office. Since May 2008, Arkady has been an aide to the President.