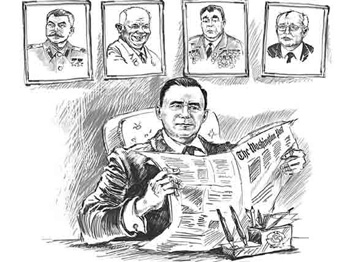 Andrei Gromyko was the quintessential Soviet Foreign Minister under Stalin, Khrushchev and Brezhnev

Known in Western circles as "Mr. No" for his characteristic caution and obstinance, Gromyko played a direct role in averting the Cuban Missile Crisis.
Born on July 18, 1909, in a Belarussian village, Andrei Gromyko graduated from the Minsk School of Agricultural Technology in 1936, the first in his family to go to college. He became a diplomat by chance when young Party workers were recruited to the Foreign Ministry before World War II.

Andrei caught the eye of Foreign Minister Vyacheslav Molotov, who sent him to work at the Soviet embassy in the U.S. Before Gromykoґs departure, Molotov introduced the diplomat to Stalin, who had recently emptied the ranks of the Soviet Embassy in Washington in one of his infamous purges.

The Leader gave Gromyko a useful piece of advice: "When you go to America, visit American churches to hear the priestsґ sermons. They speak very clear English, and they have very good pronunciation. It is not for nothing that Russian revolutionaries abroad used this method to improve their command of the foreign language."

In October 1939, a young Gromyko set out for Washington, D.C., where he diligently studied not only English, but also the history, economics and politics of the United States. He was not known to indulge in the pleasures of life abroad.

Energy, a prodigious capacity for hard work, a brilliant memory and perseverance eventually helped Gromyko to become foreign minister. But he was put through his paces as a diplomat by Molotov, who instilled in him a dogmatic and formalistic attitude, and a reluctance to understand and take into account the views of his negotiating partner.

In 1943, Gromyko was appointed Soviet ambassador to the United States, where he played a critical role in coordinating the wartime alliance between the two superpowers. On June 26, 1945, he signed the United Nations Charter in San Francisco on behalf of the Soviet Union, one of the U.N.'s original founding members. A year later, Gromyko would be appointed Soviet ambassador to the organization.

Dreams of Becoming an Airman

He is remembered as a dry, emotionless, buttoned-up man, but in his youth he was a bit of a romantic. He dreamed of becoming a pilot for the Russian military, but that did not happen. Gromyko used to say pilots and diplomats had something in common: The need to keep a cool head in extreme situations. He mastered that skill to perfection. His coolness was enviable.

In 1962, with the Cuban Missile Crisis at its peak and the world on the brink of nuclear war, Gromyko would meet with U.S. President John F. Kennedy to stave off the conflict.

"You have to understand the era, when people needed to survive," I was told by Alexander Bessmertnykh (see page 4), who was his aide and later himself became foreign minister. Gromyko grew a thick protective skin, beneath which lay a gentle and vulnerable man. That protective shell kept him afloat. After the war, any links with the external world were a mortal danger because the most damning charge was that of spying. Diplomats were at special risk. His recipe for survival was the word "no." People perished when they said "yes." If you said "no," you were safe.

So he put on a mask which everyone thought was his true nature. His assistants, who saw him at home and at his dacha, believe he was one of the most erudite and intellectual people of his time. His desk was piled high with books, mainly history, leaving only a small square of free space. Asked by Bessmertnykh why the same books sat on his table so long, Gromyko replied that it was his rule never to put a book back in the bookcase until he had finished reading it.

Gromyko would be the one to push Mikhail Gorbachev, then a relatively young politician, to the post of General Secretary of the Soviet Union in 1985. Gromyko would later be expelled from the Politburo-the highest ruling body in the U.S.S.R.-for his conservative views following Gorbachevґs massive economic and social reforms, only to die a year later, in 1989, two years before the collapse of the country and system he had dedicated his life to.

Wearing down his opponent

The Soviet minister did not believe in inspired hunches or clever diplomatic tricks. Those ran counter to his inborn caution. He was tireless and imperturbable. He was an actor who skillfully masked his intentions and moods. Rarely did his emotions prevail over reason. If he lost his temper, it was a flare-up that had been carefully thought out in advance.

Gromyko put a high premium on doing his homework: selecting materials for negotiations. He always did it himself in order to be on top of his job. He did not mind doing rote work, so he often took the upper hand over his less-prepared and less-experienced foreign colleagues. He could negotiate for hours without missing or forgetting a point.

Coaching his son on his way to his own foreign posting, Gromyko advised him: "Donґt drink at receptions. By drinking, a diplomat is digging his grave. Donґt stick your neck out, be modest. Try to do more listening than talking. If you are not sure if you should talk, it is better to keep silent. And one more thing, donґt make friends with foreigners. For a politician and a diplomat, it is a hindrance."

Gromyko knew English well, but he insisted on using an interpreter. This was his ruse to gain extra time for thinking. While the interpreter was translating he was already thinking about the answer.

When he became minister, Gromyko skilfully bargained serious concessions in exchange for insignificant ones. He took advantage of his partnersґ impatience and extracted consent from them. He was never in a hurry and he had infinite patience. He tried to wear down opponents by bargaining over every trifle. It was not until he was satisfied that the lemon had been squeezed dry that he passed to the next item. He stored up minor wins until they added up to a major success.

But there was flip side to this tactic. He sometimes unnecessarily delayed things and missed an opportunity to strike a good bargain. While delaying, a new president would come to Washington and offer far less favorable terms.

In his speech to the 24th Party Congress in 1971, Minister Gromyko said "There is not a single important issue that today can be solved without or in spite of the Soviet Union."

The years of détente were the peak of Gromykoґs success as foreign minister. But the invasion of Afghanistan and the stationing of medium-range missiles in Europe killed détente. In his later years - when Brezhnev was ailing and unable to govern, and continuing after Brezhnevґs death under Andropov - Gromykoґs policy gave the impression of being ill-conceived. Relations with America were going from bad to worse. The Minister delivered hawkish speeches that nobody listened to. He lost his knack for dealing with the Americans. He was probably aware that something was going wrong.

Minister Gromyko could be relied on to fulfill the will of whoever was at the head of state-Stalin, Khrushchev, Brezhnev. That helped him to survive. He was ever-cautious and avoided risk. That was one reason for his political longevity in the Soviet Union.

Leonid Mlechin is a renowned Russian TV journalist and host of the show "The Special Files." Mlechin is also a popular political writer, author and historian. He is a member of the Eurasian Television Academy.