A tour de force for London 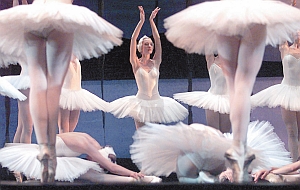 The Mariinsky's ballet troupe is considered among the world's best. Here, they perform a scene from Tchaikovsky's Swan Lake

Londoners seem to have become as accustomed to summer seasons of Russian opera and ballet as they are to afternoon tea. Each year, the Bolshoi and the Mariinsky take turns at Covent Garden: this year, the Mariinsky open with Wagner's operatic marathon, the Ring cycle.
Der Ring des Nibelungen

From July 29 to August 1 at London's Royal Opera House, St Petersburg's Mariinsky Theatre will present Wagner's Der Ring des Nibelungen, the composer's most ambitious opera. On four consecutive nights, the four parts of the cycle (19 hours in total) - Das Rheingold, Die Walküre, Siegfried, and Götterdämmerung - will be conducted by the Mariinsky's artistic director Valery Gergiev. One of the best Wagnerian conductors, Gergiev has not only made almost all of Wagner's operas part of the Mariinsky's repertoire, but he presents them regularly on the world's best stages. The Ring cycle has already been seen in Europe, the United States, China, Korea and Japan. London, however, will be treated to a revamped Ring directed by the young Alexander Zeldin.

The epic sweep of this new version, in which the traditionally ponderous and archaic staging style has been replaced by video designs, will first be seen in St Petersburg during the White Nights musical festival in early July. This reworking of the Ring created by the Mariinsky in 2003 should surprise no one: the restless and charismatic Gergiev has a habit of taking second looks at his own productions.

In this definitive version of Swan Lake, Uliana Lopatkina will dance the double role of Odette/Odile. Lopatkina makes one think of the great dancers from tsarist times, or the revelations at the Moscow Arts Theatre. A girl's inescapable pain is the ballerina's theme, but it is expressed as an axiom, without sentiment or frippery. This theme is echoed by the corps de ballet whose technical perfection guarantees the trademark style: soft steps, expressive arms, an impeccable sense of the ensemble.

Stylistic purity and dancers breathing in perfect unison distinguished the original Sleeping Beauty created in St Petersburg by Marius Petipa. This version, by the great Mariinsky dancer-turned-choreographer Konstantin Sergeyev, is no less brilliant. The theatrical universe of Sleeping Beauty, "an encyclopedia of classical dance", is as complex as it is harmonious. The baroque polychromatic quality of a simple-hearted fairy tale is coupled with the gallant aesthetic of ballet academicism. The role of Princess Aurora is danced by Ekaterina Osmolkina, known for her soaring leaps and ability to effortlessly subdue the fastest tempos.

For Londoners, Romeo and Juliet is a love that has been handed down through generations. Their genetic memory is still infused with images of the Juliet created by the divine Galina Ulanova. And Leonid Lavrovsky's popular and powerful staging will never displace their affection for the delicate, Botticelli-style production of Englishman Antony Tudor. This comes not only from loyalty, but from the English theatre's attachment to life's little details, intelligent stagings and the minutiae of the actor's art.

On this tour, different Juliets will blend ballet traditions with a contemporary view. The lithe, long-legged Alina Somova was only a couple of years ago a dancing prodigy. Today, she has astounding flexibility, a mature understanding of the essence of movement and a seasoned ballerina's aplomb. The exquisitely beautiful Evgenia Obraztsova magically submits to the laws of style while subjugating those same laws to the virtues of her dancing: light phrasing, powerful spins, and ethereal lift.

Rounding out this grand St Petersburg tour are three one-act ballets by George Balanchine, whose name is historically connected to the city of Peter the Great. After graduating from the Petrograd Conservatory in the early 1920s, the young Balanchine left the Soviet Union for Paris. There, Diaghilev invited him to join the Ballets Russes where Balanchine was promptly promoted to ballet-master and given the freedom to choreograph. By the time Balanchine reached America, the acclaim had reached a dizzying crescendo and he was known simply as "Mr B".

His Rubies, set to the music of Stravinsky, is a jazzy take on the American mentality: pounding energy, Broadway abandon and dazzling self-confidence. And not an ounce of the melancholy. Melancholy belongs to the second ballet, the ever-enigmatic Serenade (music by Tchaikovsky) in which the artist yearns for what he loved best in his past life.

Like a rare piece of hand-made lace, the corps de ballet now weaves together in a round dance, now scatters like the reflections from a string of pearls, now freezes in elegantly lucid poses crowned by wreaths of arms. The outward restraint, the smouldering passion of the water nymphs, speed, synchronicity and a corps de ballet that breathes as one - these were all key concepts in the choreographic world of Balanchine. Symphony in C has four distinct movements and a score by Bizet.

The Mariinsky are brilliant masters of the limpid jumps (giving dancers the look of windblown leaves), arabesques penchées and recumbent poses. Balanchine's triptych affords the troupe a rare chance to display both its soloists and the corps de ballet.

The Mariinsky dances Balanchine as it did Petipa, revealing the depths of emotion and meaning.

The intrigue of this tour is not so much in the surefire choice of works as in the new names. The Mariinsky, which has seen a changing of the guard in recent years, excels at this "young person's" programme.

The corps de ballet, composed mainly of young dancers, still bears the imprint of tsarist times. As for the soloists, some are beginners while others are experienced, but all are young and daring.

The up-and-coming soloists include Viktoria Tereshkina, known for her tempo and precision, her timing and picture-perfect poses; Ekaterina Kondaurova, the elasticity of whose body is matched by the fieriness of her temperament (she is the younger sister of Maya Plisetskaya's Carmen for despair and volcanic passion); the boyishly ingenuous Vladimir Shklyarov; the master of romantic dance Igor Kolb; the tall and stately Danila Korsuntsev; and the gallant suitor Evgeny Ivanchenko.

Many of these names are already known to the exacting and discerning British, who like to see familiar dancers again - just as they like to discover new names.