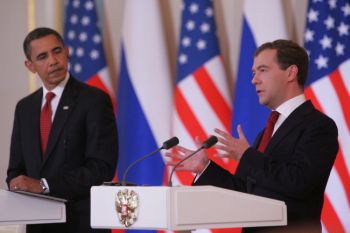 When President Obama arrives in Russia for the Moscow summit he may face a cool reception. A new poll of Russians, conducted by the Levada Center as part of a larger WorldPublicOpinion.org poll, finds that just 23 percent of Russians have confidence in Obama to do the right thing in international affairs, while 55 percent say they do not have confidence. This is one of the most negative ratings of Obama out of 20 nations polled around the world.

Russians views of US foreign policy are equally bad. Just 15 percent say that the United States is playing a positive role in the world, while 49 percent say it is having a negative influence.

Russians also say they feel bullied by the US. Only 12 percent say the US treats Russia fairly, while 75 percent of say that the US abuses its power to make Russia do what the US wants.

But the poll did find a few positive points. More Russians say that the United States is cooperative (47%) than say it is not (27%). And 41 percent say that the US respects human rights, while just 29 percent say it does not.

Americans' views of Russian Prime Minister Putin are about the same as Russians' views of Obama. Just 27 percent of Americans express confidence in Putin, while 69 percent do not.

The poll of 805 Americans (margin of error +/-3.5 percent) was conducted May 27 to June 4, 2009 by Knowledge Networks using its nationwide panel, which is randomly selected from the entire adult population and subsequently provided Internet access. For more information about this methodology, visit http://www.knowledgenetworks.com/ganp.

WorldPublicOpinion.org is a project managed by the Program on International Policy Attitudes at the University of Maryland. Funding for this research was provided by the Rockefeller Brothers Fund and the Calvert Foundation.
For more information, please visit www.worldpublicopinion.org