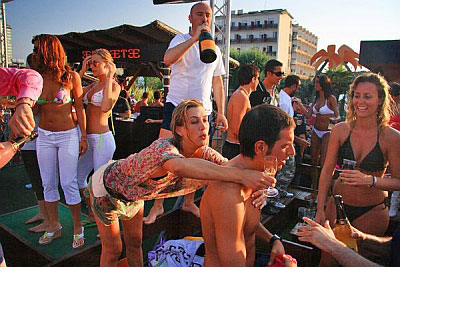 Every year at the start of the tourist season sociological research centers in various countries consider the question of how tourists of different nationalities feel about one another at resorts. Or rather, who irritates whom more?

Recently the Tripadvisor site decided to find out who has the worst manners. According to their poll, Americans took first place with 18% of the votes, the French took second (12%), and the Germans third (6%). The Russians came in fifth (5%). This couldn't but come as a pleasant surprise to the Russians, not that they wound up in the top five, but that they didn't take first place. According to certain other foreign sources, Russian tourists today are one of the most powerful irritants for other tourists. Last season in Holland, for instance, hotels were advertising vacations "without Russians" (evidently, all other criteria were insignificant compared to this incentive). Meanwhile a Dutch cultural observer announced that 40% of his compatriots were complaining about tourists from Russia.

Whether this is true or not, who can say? Sympathy and antipathy are relative things. At one popular Turkish hotel built in the Dutch style, for example, roughly half the guests are Dutch and half Russian. They somehow all manage to get along with each other, participate in evening contests and shows and even drink together. But perhaps Dutch cultural observers are privy to other information. The main complaint about Russians these days is that there are "too many of them". Russians arrive in large groups, take half the deck chairs on the beach, talk loudly and start to impose their own rules: they order Russian music in the discotheques and teach the animators how to speak Russian.

But what can one say, there really are too many of us. Especially as compared to 15 years ago when we were nowhere to be seen - at European resorts, that is. In the 1970s and `80s, when the Germans, French, English and other Europeans were discovering the coasts of Greece, Turkey and Cyprus, the Russians were vacationing exclusively on their own Black Sea coast and on the Baltic (when Estonia, Latvia and Lithuania were still part of the Soviet Union). This state of affairs was known then as the "Iron Curtain". Europe wanted the curtain to come down, didn't it? Many of the Europeans who fought for our freedom evidently did not imagine that it would lead to these unfortunate incursions of Russian tourists.

In all fairness, one should note that Russians themselves when traveling abroad can also be tremendously irritated by their compatriots. This was especially noticeable in the early 1990s when a foreign trip was suddenly something that almost every Russian could afford. On hearing their native tongue abroad, Russian tourists would literally run in the opposite direction to keep from being recognized by their fellow countrymen and peppered with questions like, "How do you like being abroad?" This strange behavior has a fairly simple explanation: at the time Russians wanted terribly to be like Europeans, to meld into the crowd. This didn't work out very well. The foreign press and the Russian press too made jokes about the "typical tourist from Russia": baggy suit, gloomy look, and not one word of any foreign language. Today the joke no longer resonates: it's not that easy to pick out the Russian tourists. They've learned to dress the way everyone else does and how to speak a few words in this or that foreign language, though they still don't smile much.

But now there's another complaint about the Russians - their clothes are too bright. And indeed, if you spot a woman on the beach in spike heels, a bikini with sequins and evening make-up, she's almost certain to be Russian. In her defense one can say this: her man probably likes her attire, and what everyone else on the beach thinks makes no difference to her.

Meanwhile, Russian tourists have one positive feature which markedly increases their rating in the eyes of hotel, restaurant and shop owners. They're big spenders. According to American Express, 42% of all Russian tourists on vacation spend all the money they've brought with them (on average over $1,000). Although such extravagance can also rub people the wrong way. For instance, European tourists at the French ski resort of Courcheval, until recently a favorite destination of oligarch Mikhail Prokhorov, were shocked by the tips of several hundred euros that Russian tourists left so easily. Last season, however, with the financial crisis in full swing, the Russians behaved far more modestly and were not seen throwing money around.

One more complaint about Russian tourists: they want everything and right now. They want to arrive first at dinner, get the best seats on the bus, and go on every last excursion. On this subject, I heard a story from an Italian businessman who sells exclusive wines in Russia. He organized a wine-tasting of his various wines, from the least expensive table wines to the most expensive rare ones, for his Russian partners. His partners arrived and promptly polished off all the most expensive wines, then the mid-range, then the table wines. "That's not how you do it!" the Italian was indignant. "You begin with the least expensive wines and gradually work your way up to the most expensive." The Russians were sincerely baffled by their Italian friend: "We want to first try the very best and then everything else." That, in a nutshell, is the principal difference between the Russian and European mentalities: why begin with the cheap stuff if you can go straight to the top of the line.

That said, there are signs that this Russian phase of "try everything!" is coming to an end - and the crisis has nothing to do with it, we're growing up.