Cycling all the way to London 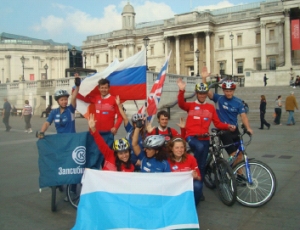 A jet airliner covers the distance between the Russian city of Yekaterinburg in the Urals and London in about six hours; a car, in 110 hours. But has anyone ever wondered about riding a bicycle over this distance? The participants in the bike race Challenge 2009 rode 5,200 km (3,231 miles) from Yekaterinburg to London via major Russian and European cities in exactly one month.

Established in 2007, the international biking club Challenge organises annual races in which anyone who wishes can take part. To qualify, one needs to play an intellectual sports game - the winners are then put on the team. Last year, they cycled to Genoa in Italy.

This year's cycling marathon started in Yekaterinburg, a major industrial centre in the Urals. Dubbed the Capital of the Urals, it is located on the border of Europe and Asia. The bikers set off on their long journey August 17.
Interestingly, they started at a monument to Yefim Artamonov, a local inventor who designed the first pedal operated front-wheel drive bicycle with handlebars.

This year's marathon featured two teams from Yekaterinburg and Khanty-Mansiisk, led by the race initiator, Anatoly Cherkasov - a total of 18 people.
Their first destination was Irbit, the oldest city in the Urals, world-famous for motorcycle production. The Ural motorbike with left side-car which accompanied the bikers all the way to London was in fact a product of the Irbit plant.

The motorbike, tailor made as a gift for the London Transport Museum, caused genuine excitement from the employees of the British Consulate General in Moscow. The amazing vehicle will be on display in London in November.

"It was hard in the first few days, especially on the girls. I know they were crying their eyes out at night. The team had to adapt to the workload and to each other as well, and to get used to riding in bad weather. It took them about two weeks, and then things normalised," said Sergei Shumilo, an organiser.

Passing through Russian cities and towns, covering an average of 170-200 km (over 100 miles) a day, and sleeping in tents, they finally reached Moscow, where they met the British Consulate General employees.

In addition to the motorcycle, the group was bringing along a velomobile (bicycle/tricycle with a body) which caused keen interest everywhere they went all the way to London.

The wonderful vehicle was designed and built by Alexander Mikhailov, one of the race participants. Another rarity along for the ride was an exact replica of Artamonov's bicycle.

After Moscow they rode on to Minsk, the capital of Belarus. There was a van where they could take cover from bad weather and get some rest.
Their route crossed seven countries, including Russia, Belarus, Poland, Germany, Belgium, the Netherlands and Britain.

They rode into London's Trafalgar Square on September 18, exactly on schedule.
"Once there, they called a news conference supported by the Russian Embassy to Britain. Shortly before that, we had a meeting with Russian poet Boris Burlyayev who has lived in London for over 20 years. He dedicated a poem to our race," Shumilo said.

The final straight of the bike race was also covered by a Russian-language TV channel which broadcasts its programs all over Britain.

Next year, the indefatigable bikers want to challenge the Arctic. Several groups plan to participate, Russian teams as well as foreign teams from Finland, Britain and Sweden.