The Russian wives of foreign husbands 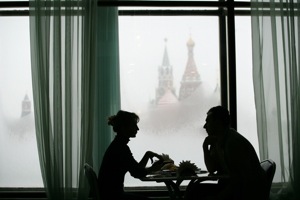 According to the SuperJob website, only 7% would still agree to marry a non-native, 12% are undecided, and the rest are adamantly against any such arrangement. The general consensus was summed up by the respondent who wrote: "Russian men may be coarser, but they're our own."

This is especially strange since only recently a "foreign prince" was the man of most women's dreams in the former Soviet Union (90%). And this wasn't just a dream. It was much more: an emergency landing strip, a potential ticket to a happy family life. In other words, the average Russian woman between the ages of 18 and 65 firmly believed in her heart of hearts that her life with all its unresolved problems (drunken husband, tyrannical boss, lack of money) would magically change when He appeared: generous, kind, solicitous, with the face of Richard Gere or Kevin Kostner. (In the early 1990s the picture of the Western prince was based on box-office hits like "Pretty Woman" and "Bodyguard".)

Why Russian women felt so sure of this is another question. After the "iron curtain" came down, in addition to the chance to partake of the boons of Western civilization, Russian women received yet another substantial bonus. They suddenly discovered that they were considered practically the most beautiful women in the world. Whether that's the case or not is hard to say. Research studies have not been done. But this is an instance when a sincere belief was all that was needed.

Of course, this legend did not come from out of nowhere. Probably the few women who were allowed to travel outside the USSR were indeed very attractive (I wouldn't be surprised if the decision was taken at the very top since this was a matter of national prestige): dancers from the Moiseyev Ensemble, ballerinas from the Bolshoi Theater, to say nothing of the Soviet movie actresses who shone at the Cannes and Venice Film Festivals. The reflected beauty of these ravishing representatives of the USSR was miraculously projected onto all of their female compatriots. It's hardly surprising that many of them wanted to take advantage of this. In the early 1990s only the laziest Russian women were not engaged in efforts to plight their troth to a foreigner. The only surprising thing is that the entire female population did not emigrate during those first heady years of freedom (they were probably too lazy). Happy stories of Soviet Cinderellas meeting their foreign princes circulated by word of mouth while marriage agencies popped up in just about every sizeable city. Meanwhile, the vital statistics (age, appearance) of these "Cinderellas" played no role in their fate. Everyone had a chance.

How the fairytale played out in reality emerged much later - with the mass distribution made possible by the Internet. It turned out that these foreign princes often had little in common with that grand title and did not necessarily own a luxury villa and yacht as their brides imagined. And the move to a Western country was not necessarily paradise. At one point the Russian press was fairly teeming with hair-raising stories of Russian-foreign unions, some with fatal ends. Today the spotlight is on Russian women who have returned to Russia with the children of their foreign husbands, in violation of court rulings abroad. And the foreign fathers who have then kidnapped these children and spirited them out of Russia.

Psychologists versed in the subject are convinced that 80% of these marriages break down. This happens for one reason: the husbands and their wives want different things. Russian women, of course, love flowers, poems and the romantic like. But some are highly practical. (On my way to work the other day, the car in front of me was sporting an amusing bumper sticker: I'LL MARRY YOU FOR AS LONG AS THE CRISIS LASTS. Every joke, as they say, contains a grain of truth.) In the difficult `90s many women did not hide that fact that for them a foreign husband was just a "means of transportation". They would move to a prosperous country and then think what to do next. This is what led the young beauty with the conservative education to marry an aging car mechanic. Car mechanics are entitled to happiness too, of course, but in the ordinary scheme of things these two people would never have come together.

Meanwhile, the foreign grooms, worn out by their emancipated countrywomen, hoped to find in their Russian brides a European version of the Filipino: submissive, accommodating, and eternally grateful to her husband for rescuing her from the "lower depths". Only a very naïve person with no idea of what he was getting himself into could expect a Russian woman to be submissive and accommodating. No, a Russian woman can be submissive if she needs something from a man - for instance, to get him to marry her. But once the happy event has taken place, her priorities will change. There's an anecdote that illustrates this situation perfectly: a woman visits a man for the first time, they spend a lyrical night together, and when they wake up she says: "Now, we'll put the couch over there."

Strangely enough, many foreign men who have been burned by their Russian wives do not give up hope and return to the sites that can help them meet another Russian bride. Evidently, they don't get enough of an adrenaline rush from their day-to-day lives at home. For men like that we have good news. Roughly 25% of Russian women dream of finding happiness with a foreigner. True, all of these women are "aged 55 and up". But since when is age a hindrance to real happiness?