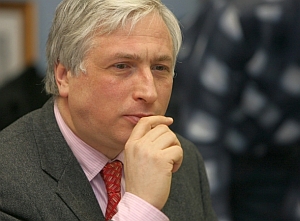 Strictly speaking, the Second World War started because of the town of Danzig (known in Polish as Gdansk). Under the terms of the Versailles peace treaty, Poland received Upper Silesia, which had previously belonged to Germany, together with its coal deposits. The port of Danzig, to which Poland also laid claim, was turned into the Free City of Danzig, with special government status under the protection of the League of Nations. As a result, East Prussia was left cut off from the rest of Germany.
This made the Germans extremely annoyed, even though no one was stopping them travelling to the city, living in it, investing money or using the port of Danzig. Now, Alaska was also cut off from the rest of the United States, for example, but did that mean the Americans had any problems with their right of access across Canadian territory?

People have a habit of blaming everything on the Versailles treaty, signed after the First World War, saying that it led Europe into a another war. The terms of the Versailles treaty are seen as extortionate and unjust. Yet after its victory over France in 1871 Otto Bismarck's government had no qualms about grabbing two French provinces for itself and imposing a substantial indemnity payment on the French. And the conditions imposed on Russia in 1918 by the peace treaty of Brest-Litovsk were even more extortionate. But when the Germans were treated in exactly the same way, they were indignant and started saying that everyone hated them.

The peace treaty signed at Versailles in May 1919 was just an excuse for the German nationalists. Hitler would have started a new war even if the Versailles treaty had never happened! He was pursuing his plan - to conquer "living space" for the German people.

It is believed that the first shot of the Second World War was fired at 04:47 in the morning, when the German training ship Schleswig-Holstein opened fire on the Westerplatte fortress in the port of Danzig (now Gdansk)... Only recently has it emerged that the war started a few minutes earlier. The first blow was struck not by the navy but by the Luftwaffe, the air force, which instilled the same fear here that German pilots in the following years would inflict on the whole of Europe.

Hitler was particularly proud of the Luftwaffe. In September 1939 his air force boasted four thousand combat aircraft, divided into four fleets. According to the headquarters of General Albert Kesselring, commander of Air Fleet 1, half of them were used for the attack on Poland. The combination of Junkers-87 "Stuka" dive bombers (Stuka being short for Sturzkampfbomber) and tanks gave the German generals the opportunity to rapidly break through the front and defeat the old-fashioned Polish Army. The German air force carried out nine thousand bombing missions in all.

The headquarters of Air Fleet 4 was located in Schoenwald castle, not far from the Silesian town of Rosenberg. Five days before the war, Major-General Baron Wolfram von Richthofen, a special operations Flieger-Fuhrer, received orders from Goering, commander of the German air force, to prepare attack aircraft for action. The war was due to start on 26 August, but it was postponed for a few days.

In 1943 von Richthofen would become a Generalfeldmarschall, and soon after the war he would die from cancer. During the civil war in Spain he was chief of staff of the Condor Legion. After the bombing of the Basque town of Guernica in 1937, von Richthofen wrote in his war diary:

"Guernica, a town with five thousand inhabitants, has been literally wiped off the face of the earth. The bomb craters can still be seen on the streets. It's quite stunning."

Von Richthofen personally saw off the commanders of the dive bomber squadrons. Their target was the small Polish town of Wielun, a hundred kilometres east of Breslau (known in Polish as Wroclaw). The aim was to destroy the town. The special operation was to test the improved Junkers-87 dive bomber, which had just come into service. The aircraft factory in Dessau had fitted them with engines that were twice as powerful (1,150 horse power). The new planes could fly at up to three hundred kilometres per hour and carry a bomb load of half a tonne. They could dive on their target from a great height.

Wielun had always been an out-of-the-way place. Sixteen thousand inhabitants, mostly peasants. The town had changed hands many times. In 1793 it was under Prussian rule, then in 1807 - thanks to Napoleon - it returned to the Poles. After the division of Poland and before the First World War the town came under the rule of the Russian crown.

On 31 August 1939 the air raid warning sounded here, but the townspeople were sure there was nothing to worry about. In Wielun there was no railway junction and no industry, except for the little sugar refinery on the outskirts. The cavalry regiment stationed in the town had been moved closer to the border in the spring. The town had no anti-aircraft guns and no bomb shelters.

Twenty-nine Junkers of the 76th squadron commanded by Captain Walter Sigel took off from the airfield at Nieder-Ellguth, north-east of Oppeln. Military engineers had carefully asphalted the airstrips here. Fog descended on the airfield that night, but Captain Sigel took his planes up. The clock showed two minutes past four in the morning. The flight took about twenty minutes. At approximately 04:35 the dive bombers swooped down onto the sleeping town with their sirens wailing. The first bombs fell on the western part of the town. The squadron returned without loss.

The German pilots dropped their first bombs on the Catholic All Saints Hospital, although they could not have failed to see the red cross on its roof. The planes bombed the hospital three times. One of the bombs left a crater in its garden big enough to take half a house. Two nuns, four nurses and twenty-six patients died in the raid. Three waves of planes attacked the town. This time they bombed the eastern part of the town. From two kilometres up the planes went into a steep dive onto their target. At an altitude of eight hundred metres they opened their bomb doors. The result of the bombing was two-thirds of the town destroyed and 1,200 people killed.

But why did the Germans need to destroy a small provincial town even before the war had started? There wasn't a single soldier in Wielun! And the German pilots knew that.

They didn't bomb the town in order to destroy some supposed enemy. Wolfram von Richthofen was testing the modernised Junkers 87 on live targets. But Captain Walter Sigel, the squadron commander, was expiating his guilt. Two weeks before the start of the war, on 15 August, his squadron had been demonstrating its battle training in the presence of senior commanders. At the Neuhammer training ground in the Zagan area his airmen were supposed to show what their new machines were capable of. The squadron's assignment was to simulate low-level bombing. Instead of bombs they were dropping sacks full of cement fitted with smoke shells.

Because of ground-level fog a disaster occurred - the young pilots made a mistake in determining their altitude and thirteen planes plunged into the ground. Twenty-six men were killed. The more experienced Captain Sigel managed at the last moment to pull the control column back and regain height. The military tribunal acquitted him. On the eve of war everyone who could fly was needed.

The war had already begun, but the imperial ministry of foreign affairs sent the Polish embassy in Berlin, which had not yet closed, a diplomatic note composed in particularly cynical terms: "The German air force has received an order to restrict itself in Poland to exclusively military targets."

From the very beginning of the war Hermann Goering's airmen made no distinction between military and civilian targets. Wielun was followed by the destruction of Warsaw. On 9 September, since the Polish capital was continuing to resist despite being surrounded by German forces, carpet bombing of Warsaw began. The city was bombed mercilessly for three days. The most terrible raid was on 25 September.

"The Stuka bombers circled over the defenceless city, dived with their screeching noise and dropped their bombs on civilian targets," recalled Richard Pipes, later an aide to the American president Ronald Reagan. "Houses collapsed, burying thousands of people beneath the rubble. Mobs of nearly crazed people, carrying children and bundles, ran along the streets. German pilots, the worst beasts in the world, flew very low, raking the streets with machine-gun fire. By evening Warsaw was in flames and resembled Dante's Inferno...

"I shall never forget the sight that met my eyes on the corner of Marszalkovska and Zielna Streets: horses roaming about or sprawled on the pavement, burning houses, people running in search of shelter..."

More than four hundred planes flew 1,200 sorties. These were nearly all Junkers 87s and Dornier 17 bombers. Since the fast dive bombers could not drop incendiary bombs, slower Junkers 52s were also used. The fiery cloud over the city rose to a height of three kilometres and slowly moved away along the Vistula river to the north. During several days of bombardment and artillery attacks twenty thousand people died in the city, and fifty thousand were wounded.

At five o'clock in the morning on 2 September, German tanks of the 1st Light Division entered the town of Wielun. Among the division's staff officers was the young Count Schenk von Stauffenberg, the future plotter and the man who five years later would try to kill the Fuhrer. He did not yet have any doubts about the Fuhrer's competence.

Count von Stauffenberg, full of contempt for Poland, wrote to his family:

"It's full of sand and dust. It's surprising that anything grows here. The local population are a rabble. Many Jews and people of mixed blood. These are people who are used to being ruled with a whip. The thousands of prisoners of war will be useful in German agriculture. They will work hard and willingly."

After the end of the fighting von Stauffenberg wrote home: "It's important that we begin a planned colonisation in Poland." Wielun was incorporated into the Reich. The Poles became undesirable elements on their own soil. The Nazis had far-reaching plans for the town. The SS intended to turn it into a model German settlement, eradicating everything Polish. Only German schools were open in the town. But the Nazis did not succeed in fully Aryanising the town. On the night of 19 January 1945 Wielun was liberated by the advancing forces of the 1st Ukrainian Front.