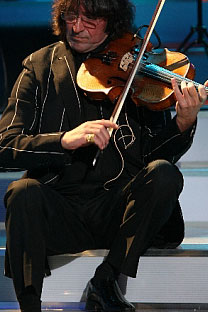 Certain performers are "inscribed" in time by fate itself and predestined to stir up the life of music, extend the range of its activity, and discover the unexplored in the seemingly known. Yuri Bashmet is such a performer - a dynamic and generous talent. Thanks to him the world has come to recognize and appreciate the viola as a solo instrument. Yuri Bashmet was the first violist to give solo alto concerts in nearly all the cultural capitals of the world. Some 50 viola concerts and other works by contemporary composers have been written especially for Bashmet or dedicated to him. As a conductor and soloist he performs with the world's best symphony orchestras and organizes joint concerts with today's most outstanding musicians. Journalists around the world call him "the new Paganini".
Reading Bashmet's remarks is a pleasure in itself. For instance: "When I studied at the Moscow Conservatory, all the students in the Viola Department were either moronic boys or fat girls." Indeed, among musical instruments the viola occupied a modest place in ensembles and orchestras. Yuri Bashmet blazed a triumphant trail for the viola to soloists and concerts. Today viola students are no longer grey mice in croweded orchestra ranks, but striking youths and divine young girls whom one can't help but notice. Bashmet himself headed the Experimental Viola Department at the Moscow Conservatory and was able to say something new about his instrument.

The viola is now wanted and in demand, and this metamorphosis is all to the credit of Yuri Bashmet. His brilliant career as a performer and conductor has consolidated his reputation as one of the most original musicians today, to say nothing of his rather colorful life, his sensational interviews and publicity stunts. Today Yuri Bashmet is a famous brand, cult figure, box-office gold. He has long played his viola with the most distinguished orchestras; he has played the music of the world's best composers and in the best concert halls. He is head of one of Moscow's most elegant music festivals, December Evenings, formerly the domain of world-famous pianist Svyatoslav Richter. His unique creative energy allows him to run two collectives: the Moscow Soloists Chamber Orchestra and the New Russia Symphony Orchestra.

Audiences are ready to listen to anything performed by Bashmet. His impressive demeanor attracts people like a magnet, while only the lazy have not compared his extravagant look to the ecstatic image of Paganini. Bashmet's programs on television win in the ratings, while his participation in a show guarantees a full house. His name alone can gather the best performers.

Bashmet is open to all musical genres and styles, easily moving from academic art to avant-garde experiments. But he always returns to the world of classical music in which, in his words, one "reads" messages to Eternity. The swiftness of these switches conceals a mystery which seems to go back to Bashmet's childhood. While still a music student in the city of Lvov, the future maestro devoted all his free time to a rock group in which he played both the guitar and drums. He also wrote the music for almost all the instruments.

Today Bashmet performs duets with bards. Or he may, as a master of surprises and improvisation, throw a cloak over his shoulders and accompany a bold Cossack song on the drums. Recently he made his film debut in an important role in Sergei Solovyov's "Assa-2" and found enormous pleasure working on the noisy set. Bashmet is indeed someone who knows how to find pleasure. Isn't that rare quality what makes for the omnivorous creativity of this man-in-perpetual-motion?

"If I leave, I'll regret it and yearn to return"

Bashmet is true to his role as a virtuoso. Whether one is speaking of his repertoire, or of his titles and prizes, it is impossible to list them all. Many of his renderings have set the standard: Bach's Chaconne, Schubert's Arpeggioni Sonata, Mozart's Concert Symphony for Violin and Viola, Shostakovich's Viola Sonata. For Bashmet, playing is not running away from reality and not an illusion, but an expansion of the Universe. And classical music is not a museum of petrified exhibits, but a living and powerful force. As is contemporary music, in which Bashmet the soloist and Bashmet the conductor see not labyrinths or conundrums, but a strict system that must be made comprehensible. Bashmet's transcriptions may scald or they may soothe, they may torture you with questions or they may explain the reasons. Over the last thirty years composers have dedicated many opuses to Bashmet, the first composer to do so was Alfred Schnittke. Bashmet's viola scintillates in Schnittke's Concert for Viola and Orchestra, it almost meditates in the minimalism of Giya Kancheli's Liturgy, and it conveys the choral flow of sound in the melodies of Alexander Raskatov.

Bashmet also loves to arrange dramaturgy. For instance, his Harold project, devoted to the eternal image, the cultural myth. He is intrigued by the possibility of the reincarnation as a romantic hero, which defined the thinking of all subsequent generations. The voice of his viola showed the development of this Byronic theme: from Berlioz's great symphony Harold in Italy to the modern-day Harold in Russia by Alexander Tchaikovsky and Harold Again by Oleg Felzer, where from an academic stage real jazz sounds with rhythm groups and an electric guitar.

Bashmet the musician is interesting in that his viola versions of music written in different centuries and different countries are always a reflection of the era - both of what was outside and of what was packed by humanity into files in the process of musical development.

Bashmet, in discoursing on life, arrives at his own concept of integrity: if you study music, your only god is the composer. Also important for every man is his house. That is why Bashmet has never responded to the suggestion that he live comfortably in some warm and luxurious corner of the globe. In an interview, he explained it this way: "I want to be free - that is, to have the right to choose. If Richter had left Russia, he could not have played in Moscow and St. Petersburg. I realized that if I left I would regret it and yearn to return. And how would I see things after I returned? For me Moscow is the creative center. Paris and Munich are cities that are nice to arrive in. And nice to leave."


What the Queen Loves

"Once I found myself playing on an absolutely fantastic instrument made by the master Stradivarius. It was a concert in memory of Princess Diana in London. Playing on that viola was very difficult. Afterwards I was sick for ten days, my arms and my shoulder ached. After the concert Queen Elizabeth came up to me with her suite and asked:
"Tell me, how was it to play? Did you like the instrument?"
Since the viola had been loaned to me by the Royal Academy of Music in London, I said:
"Yes, it's a tremendous instrument, but it was very difficult for me."
"Why?"
"No one had played it in a long time."
"Can you be more specific about the problems you had?"
"I don't know how to put it exactly, but I'll try to translate word for word: it was like trying to ride an unbroken horse that had never had a saddle on its back."
The Queen laughed. She liked that a lot. Her suite moved on, and the last woman in the procession, apparently a member of the royal family, asked:
"Did you prepare long for your meeting with the Queen?"
"I prepared to perform Mozart on a famous Stradivarius viola," I said.
"So you didn't prepare to meet the Queen?"
"No."
"Horses are the only thing the Queen loves..."


Yuri Bashmet created the international charity foundation Dream Station to help beginning musicians and musicians in need. Dream Station is also involved in musical education and the promotion of classical music; it organizes concerts with top-level musicians the tickets for which cost very little. Yuri Bashmet also founded the Dmitry Shostakovich Prize for outstanding achievement in the sphere of world art. Every year the awarding of the prize is a memorable event. Previous winners include Thomas Kvasthoff, Anne-Sophie Mutter, Olga Borodina, and Maxim Vengerov. The prize has also been won by a choreographer: in 2006, the 100th anniversary of the composer's birth, Yuri Bashmet awarded the prize to Alexei Ratmansky for his production at the Bolshoi Theater of Shostakovich's ballet "The Bright Stream".


Bashmet's Recipe for Ringing in the New Year

Yuri Bashmet values home and always rings in the New Year with his family. He has even invented his own festive ritual for the occasion. A few minutes before midnight, he always takes out his viola and plays fragments from his repertoire. One time he wasn't able to do this and, says Bashmet, a bad feeling haunted him for the rest of the year.