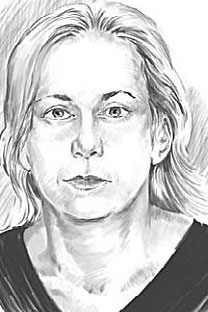 On September 1, 2004, I urged my three nervous children into school. We had just arrived in Moscow and everything was new to us. It was a magnificent summer day, nothing to suggest autumn except for the Russian children walking purposefully to school. As journalists, my husband and I had lived in Europe for six years already and squeezed a lot of wonderful as well as scary and confusing times out of those years. Here we were lucky enough to begin a new adventure, in one of the most epic countries in the world.

These were the kind of thoughts running through my head as I returned from school to our Soviet-style apartment across from the Hotel Ukraine. I turned on the TV to see what was on offer to improve my Russian skills.

Instead I saw immediately that there was some kind of school crisis going on - mothers with small headscarves were crying outside a schoolyard, men ran around haphazardly. I thought this was happening in Moscow. There were clearly children taken as hostages. I called my husband, who was making a good show by already appearing in the office.

"There is a school taken hostage in Moscow!" I almost yelled to him over the phone.

"In North Ossetia," he said. This meant little to me. I knew something of the hard scrabble life and conflicts in the Caucuses, but North Ossetia was new to me. But soon the children in the school gymnasium rigged with explosives, sweltering in the heat and stung by urine, became the only world that mattered. Beslan, its besieged school and dirty streets, became hauntingly familiar to me over the next 52 hours.

It is five years since School No 1 in Beslan was stormed by terrorists and 1,000 students, parents and teachers were taken hostage. All of Russia, and much of the world, stopped, horrified, holding vigil for the next two and a half days. It would all end badly, the attempt to rescue the hostages chaotic and botched. By September 4, 331 people were dead, almost 200 of them children. Hundreds more were seriously injured.

On the first day, strangers cried together. After the initial shock, we all struggled to understand.

My husband left for Beslan that day. I had not yet started working, so I paced the apartment trying to think of something else besides those children in the gymnasium of the school in Beslan. All of Russia could think of nothing else, in fact, and I bonded with my host country in some primitive way, and quickly.

My husband had covered many conflicts, but he would come back from Beslan a little bit different. So did his Russian colleagues. Walking through a makeshift morgue of children does not leave you.

When the siege ended in such catastrophe, the world wept with Russia. Beslan became known as "Russia's 9/11". Many prayed for those who died, more prayed for those who climbed out of windows, singed skin and broken hearts, to a much more complicated and tragic life. Every single living person in the city of Moscow was clinically depressed in the autumn of 2004. Anxiety was diffuse, but typical aggressions of everyday living were absent. For a few months, the Bentleys stopped at the crossings and young teens walked the pensioners across the street. There was a strange and quiet empathy in the air.

I remember walking on a bridge over the Moscow River on New Year's Eve, 2005. The sadness had lifted in Russia, as quickly and collectively, it seemed, as a crowd taking off their coats. At a certain point, people had to move on. Yet this was eerily quick. Of course time naturally moves away from grief. But my Russian and expat friends agreed - there was no sense to be made and a heavy effort to this forgetting.

When it comes to Beslan, my sense is that Russia - aside from the few Russian activists who will not forget - wants to keep the awful pain away. I understand moving away from the pain. But it makes me wonder about the survivors. The pain is inside them. They have nowhere to go.

Nora FitzGerald was a Moscow correspondent for ARTnews.