Reflecting on tragedy: South Ossetia a year on 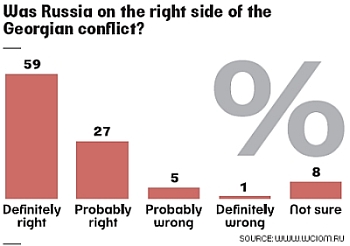 While generally supporting the country's intervention in Georgia, Russians believe that this involvement did little to appease the region. The press, commentators and politicians are all asking the same question: who or what was the real casualty?

According to a poll conducted by VTsIOM among 1,600 respondents at 140 locations, 60pc of the respondents said that Russia "did the right thing" when it sent its military to protect South Ossetia's population against last year's Georgian invasion, and only 6pc said Russia was wrong to do it. The most widespread justification for the war had a humanitarian character.

Responding to a question on why Russia had to get involved, people most often claimed that "otherwise, South Ossetians would have been slaughtered".

According to a poll conducted by another respected Russian pollster, the Levada Centre, 47pc of Russians consider the situation in South Ossetia and Abkhazia "tense", a drop of 7pc from last year's 54pc.

According to the Levada poll, 54pc of Russians think that Russian troops ought to stay in South Ossetia. Only 24pc think that troops should be withdrawn, with 22pc undecided on the issue.

This pattern of public attitudes marks a stark contrast with 2004, the first year of Mikheil Saakashvili's presidential tenure, when the situation on the line dividing South Ossetia with Georgia proper started to intensify.

At the time, only 6pc of those polled spoke for providing military assistance to South Ossetia, and 34pc said Russia should not support either the Georgian or the South Ossetian side of the conflict.

Among possible roles for Russia in 2004, "brinksmanship" and "mediation" were the most popular ones, garnering about 29pc of support.

So what made the Russian public change its mind? Was it merely the propaganda emanating from the state-owned television channels? "This can provide just a partial explanation for the change of mood in society," said Olga Kamenchuk, VTsIOM's director of communications.

"Tensions around South Ossetia have been growing steadily for many months, but the dramatic outcome was still a surprise to many. Even some people who had access to Western media during the conflict supported the intervention of the Russian troops. Many of them noticed that the United States and the EU countries were very slow in their reaction to the initial attack against Tskhinvali, and that the Western media's criticism of Russia had some tinges of propaganda in it.

"In this situation, society was consolidated around the idea of intervening on the side of the Ossetians - for various reasons."

Meanwhile, 34pc more people think that the right of nations to self-determination should be respected "in certain circumstances", and that cases like this should be reviewed "on an individual basis".

The politicians' reactions to the tragic and controversial events of last summer reflect a certain vagueness in the public perception. "I have no doubts that Russia had to get involved in the conflict," said Sergei Mitrokhin, the leader of the liberal Yabloko party.

"However, the scope of that involvement could have been much smaller. I don't think it was the right step to recognise Abkhazia and South Ossetia as independent countries because this attitude contradicted Russia's stance on similar cases in other countries. But I have no doubt, and international experts confirm this, that it was Saakashvili who organised the provocation."