Lifestyle
RBTH
Based on material from Argumenti i Fakty 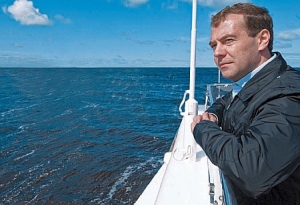 Both Russian President Dmitry Medvedev and Prime Minister Vladimir Putin prefer to spend their holidays in their homeland - either on the Black Sea resort of Sochi, where Russia will host the Winter Olympics in 2014, or somewhere with a backdrop of raw nature.
This month, Dmitry Medvedev has been spending time in Sochi. It's not the first time that he, as president, has been to Bocharov Ruchei. Throughout the year, several meetings and sessions have been held there.

In fact, Medvedev had a very tight schedule. Last year, everything got messed up: in August he decided to combine his Volga cruise holiday with his wife Svetlana and son Ilya with visiting the Volga regions. The trip was cancelled due to the fighting in South Ossetia.

This year, his family accompanied him once again.

The president began combining business with pleasure at a series of casual meetings with parliamentary party leaders which was held in one of the Krasnaya Polyana hotels. In the middle of the meetings, the statesmen, swinging their feet on the ski resort's chairlifts, went to the top of one of the trails in order to assess the future of the Olympic slopes.

Medvedev said that he had already skied there last winter.

There's a lot of other things to do in Sochi apart from preparing your skis for the winter. The president used every chance he had to go swimming in the sea, and after his talks with the president of Finland, Tarja Halonen, Medvedev took his guest for a ride on a yacht on the waters off Sochi. And as for Angela Merkel, who had also arrived for talks, he was forced to "return a favour" - a nice dinner with dishes from Caucasian cuisine.

Remember that it was during their July meeting in Munich that Medvedev was treated to Bavarian sausages and beer.

One of Prime Minister Vladimir Putin's business meetings, which was also held in Sochi last week, ended with a badminton match at the Bocharov Ruchei. His greatest fan ended up being the president's dog, a golden retriever named Aldo.

It is now well known that when he is in Sochi, the president is rarely without a camera. While returning from the inspections of Olympics-related construction work, he even managed to take some photographs from a helicopter and said that he now had a personal record of how the building was progressing at the Imeretinskaya Valley, which he could refer to when he returns next year.

Prime minister got hooked on Tuva

Putin spent both of his August mini-holidays this year (three days) and last year (one day) in Tuva. The prime minister's recreation agenda is packed with outdoor pursuits: rafting in a rubber boat on the Khemchik River, fishing and horse riding.

This year a photo of Putin, circulated in the global press, showed him swimming butterfly style (the most difficult style) in the fast-moving mountain river. Locals say that that there aren't too many people who are capable of such a swim. The water temperature barely exceeds 10 Celsius.

The prime minister's leisure time also includes a traditional cultural programme: sitting by a bonfire and watching Tuva throat singers. This year he heard performances by Hun-Hurtu and Chirgilchin (their international tours are planned for several months in advance).

In Sochi, Putin's Riviera residence has all the necessary amenities to relax during the weekend. It may be smaller than Bocharov Ruchei, but it has a pool and a sauna.

The south: a lure for kings and presidents

The tradition of taking holidays in the south was established by Emperor Alexander I in the early 19th century. All Soviet leaders, with the exception of Lenin - who simply went outside Moscow - preferred the south. Khrushchev spent time in Crimea, especially in the state cottage between Livadiya and Oreanda. There he entertained himself by swimming (they say he used an inflatable rubber tube) and fishing. But in 1964, when Khrushchev missed the coup and was replaced, he was in the Caucasus. In the 1970s, Brezhnev took a fancy to the Bocharov Ruchei residence in Sochi; it was near the Matsest and its mineral waters, which had a good effect on the general secretary's joints. Later, Gorbachev would end up under house arrest at his Foros home during the 1991 coup.