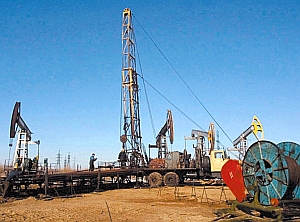 Nefteyugansk oil field - one of Russia's largest - in western Siberia

The world will face a "catastrophic energy crunch" within five years, warns Dr Fatih Birol, chief economist of the International Energy Agency (IEA). Russian analysts are less certain, but say that, in the future, Russia will launch 60pc of the new oil fields.

The IEA report is based on the assessment of more than 800 oil fields, accounting for 75pc of global reserves. Forecasters reason that the largest fields are running short of oil, and independent oil producers have already peaked. The IEA experts say that oil production declined at the rate of 6.7pc in 2008 compared to 3.7pc in 2007. They believe most oil fields will not be able to ensure adequate supply in case of post-crisis demand recovery. The situation is aggravated by under-investment in production, Dr Birol told the British press. As a result, the world will face a worsening deficit and sharp growth of oil prices in the coming five years.

Anatoly Dmitrievsky, director of the Institute of Oil and Gas Problems (Russian Academy of Sciences), points out that $280bn of investment into the development of global oil reserves has been postponed due to the global financial crisis. Mr Dmitrievsky further notes that, while it might take from several months to a couple of years to overcome the crisis, it takes at least five to seven years to kick-start development of a new oil field.

According to IEA estimates, global oil production will peak in 10 years, which will be followed by a decline. By 2030, "six Saudi Arabias" will be required for the global economy to meet its energy needs, said Dr Birol. Interestingly, until the end of last year, IEA oil production forecasts were based on demand analysis, but now the Agency also takes account of geological data, thereby implicitly acknowledging the concerns of advocates of the peak oil theory developed by geophysicist M King Hubbert.

Mr Dmitrievsky, who shares IEA concerns regarding the low rate of new developments, believes peak production forecasts are driven by economic as well as resource factors. Low oil prices are hardly conducive to investment. For example, shale oil production passes the breakeven point only at $90-100 per barrel, to say nothing of new developments in Eastern Siberia, the Arctic shelf and other regions of the world. Of course, oil is a non-renewable resource, but some reserves are yet to be explored. Mr Dmitrievsky is sure that "Russia will launch 60pc of new oil fields". Although these discoveries have nothing to do with the "cheap oil" era, they let us hope that we are not past the peak just yet.

"There could be different views as to when the peak will be reached, but it is obvious the world might possibly run out of proven reserves," believes Valery Nesterov, an analyst with the Troika Dialog Investment Company. Russian oil companies share this view. More than a year ago, Leonid Fedun, vice president of Lukoil, said that Russia would never produce as much oil as in 2007 - almost 10m barrels a day - and would be able to maintain a production level of 8.5-9m barrels a day for the next 20 years only given billions of investment in exploration. The problem is that investment is uneven and mirrors price cycles, since oil corporations prefer to spend money only when oil is expensive, says Mr Nesterov.

Oil availability in terms of price and geography is another issue. Though the oil price will sooner or later make up for investments in new field development, resource nationalism in the Middle East is starting to build. Russian protectionism pales in comparison, argues an adviser for the Government Relations Department of an international oil company present in Russia for more than 10 years. "It's true Russia is special in its own way, but if oil production were unprofitable, we would not have been here," he says.

The global crisis plays into the hands of foreign investors who want to pump oil in Russia, believes Mr Nesterov. Shelf development involves multibillions in investment, and, in his opinion, Moscow has come to realise it has few options left: either be tied up in deep water development for 150 years, or engage international corporations with their technical expertise and finance. There is a pretty high chance of the latter scenario; indeed, the rules for foreign investors to access Russian mineral reserves are likely to be loosened, says Mr Nesterov.