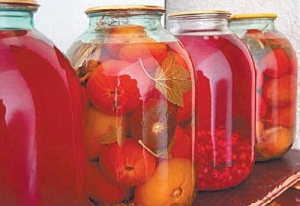 "Build your sled in the summer and your wagon in the winter," an old Russian saying advises. In the days when wagons and sleds were a part of everyday life, this was wise counsel: it was a good idea to plan ahead for summer since it came and went in the blink of an eye, while those who didnґt plan for the six months of freezing hell known as the Russian winter would find themselves in a lot of trouble.

This was especially true when it came to food. Peasants had to find a way to make cucumbers, cabbage and mushrooms - the staples of the Russian table - last the winter. Pickling was the answer, as it had been for many cultures around the world. But like so many things in Russia, it had to be done in a completely different way: while most of Europe used some form of acidic liquid, usually vinegar, as the key agent in the pickling process, here they used salt.

The idea caught on and, pretty soon, Russians began pickling everything from garlic to watermelon. And the pickling goes on to this day. Some still do it out of necessity, others as a hobby or out of habit. Nearly everyone agrees that thereґs something about products pickled at home that you canґt get on a supermarket shelf.

Below is a recipe for pickled tomatoes, a favourite at any time of year. An old wivesґ tale says that anything pickled during a full moon will come out soft and spoil quickly, so you might want to consult your calendar before beginning. Whatґs not an old wivesґ tale are the wondrous effects of pickle juice as a hangover cure: loaded with sodium, it is perfect for restoring lost salts and electrolytes, which is one of the reasons you feel so rough the morning after.