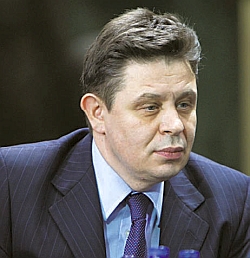 The Russian stock market is heading for recovery after its record plunge in the winter of 2008, with Russia's benchmark Russian Trading System index more than doubling from 498 at the end of January to 1,067 in August. Most analysts are optimistic, and believe investors are likely to see positive returns. In the first of a series of pieces from prominent investment professionals, Pavel Teplukhin, chairman of Troika Dialog Asset Management, assesses the situation.

Russia's financial markets are more a reflection of the US economy than of Russia's. This is because market conditions are largely determined by foreigners, one of three distinct groups influencing the markets. The second group, the Russian government, follows a "buy and hold" principle and eschews short-term speculation. The third group consists of Russian institutional investors, who make long-term equity investments and follow a highly cautious strategy. You also have the "cowboys" acting at their own risk and peril, of course, but these investors have almost no impact on market dynamics.

Six months of growth in the US market is pushing up Russian stock indexes. The oil price is another key driver for the Russian market. Today, it is well below its previous highs: if it rises, Russian stocks will rise as well. Unfortunately, the Russian government and market participants have very little influence on these indexes. Russian fundamentals certainly are present, but they have no impact on the stock market whatsoever. However, this connection might reappear several years from now, when economic growth leads to increased investments into core capital - new manufacturing sites will appear, plants, factories, property, etc. For now, Russian businesses aren't even operating their existing factories at full capacity.

Russia was first hit by the global crisis in September 2008, almost a year after the start of the banking crisis in the US. The collapse of Lehman Brothers, one of the biggest portfolio investors on the Russian market, caused foreign banks to close their limits for emerging markets. Basically, a bankruptcy of that calibre causes a systemic shock. At that time, Lehman was one of the world's biggests investment banks, which was linked one way or another to enormous financial currents. Everyone expected the US government to help out, like it did with other large investment banks. But no help was offered. A failure then occurred, a crisis of trust.

This was Russia's first major brush with the global financial crisis. Companies and major shareholders had been taking loans with their own shares as collateral. Russian financial institutions interacted with Western counteragents. So when all the limits were closed, a jolt set in. Of course, the Russian banking system was hurt, but it survived. It could have been wiped out, but it wasn't.

After Western sources of credit ran dry, Russian companies in the real economy turned to the government for help. There's nothing shameful about how the Russian government offered help to Russian shareholders and company proprietors: something else was the problem. In September and October of last year, loans were issued in enormous numbers, perhaps without sufficient credit checks into the quality of borrowers. Admittedly, in those conditions this would have been hard, since many of the benchmarks were lost. The loan period was one year and these loans will fall due this autumn. It's clear that many will not be able to return this money, raising the question of how to proceed - prolongation, restructuring, increasing collateral, etc. One way or another, these procedures will be evident within bank balances, including through increased reserves for problem loans.

This accounting measure could cause a loss of positive equity at many banks. If so, they will either have to find additional resources or, if the regulators prove too severe, declare bankruptcy.

In fact, this will be the second wave of Russia's current economic crisis. However, accounting issues can be resolved through other accounting means, such as revising asset valuation methods. Such a measure would allow a resolution to the accounting valuation problem and would weaken the second wave. Although the second wave will definitely happen, it's possible that no one will notice it.

Today, it is already clear that the second wave - the banking one - is unlikely to affect the population or the real economy. Whatever loans individuals took out recently were issued by one of half a dozen banks where the situation is not that bad. There hasn't been much lending to individual borrowers. As for real economy companies, they too borrowed from a few select banks, and last year borrowed very little.

In the first two quarters of the 2009 financial year, the US financial sector made a sharp upturn. Many banks are reporting major profits. However, this is due to changes in valuation standards recently initiated by the US regulators. This caused profits to appear unexpectedly, and big ones at that. Last year we saw record write-downs. Meanwhile, the banks continue doing pretty much the same thing. The Russian financial sector has quite a bit of "paper" losses which can quickly turn into "paper" profits. All that is required is a revision of accounting mechanisms and valuations.

Not accustomed to economic crises

Russia experienced a drop in output during the first quarter of 2009, the likes of which was unheard of even during WWII. This is indeed difficult to comprehend. But the situation in other former Soviet countries, such as Ukraine, the Baltic states and Central Asia, is even worse.

It would be wrong to compare how the US and Russian markets reacted to the economic crisis. The US economy goes through a crisis every 10 years, and has even developed a certain immunity. A legislative block is in place, as well as rules guiding the government's reaction. As for Russia, this is just the second powerful shock. We still aren't used to this, and we don't know how to react. We still believed in certain ideals regarding the free market. Now we understand that liberal economics has its pluses and minuses.

The US economy is expected to begin recovery in late 2009 or early 2010. These expectations are still on track. This means that the Russian stock market is also heading for stable growth and could regain its pre-crisis position in two to three years, provided that Russian industry starts operating at maximum capacity.

The export-oriented industries will be the first to benefit from the global recovery and spring back to life. These include metals, especially non-ferrous metallurgy, as well as oil and gas companies. However, due to domestic consumption, the gas companies will benefit less. This group will include a number of venture capital companies also geared toward Western markets - first and foremost in the IT sector.

RN Dossier
Pavel Teplukhin was one of the founders of Troika Dialog in 1991 and has been president of Troika Dialog Asset Management since 1997. He pioneered mutual investment funds in Russia and is one of the authors of the federal law on mutual investment funds. Dr Teplukhin has advanced degrees in economics and statistics from Moscow State University and gained a masters degree in economics from the London School of Economics. He has topped the national rankings as best financial manager, and in 2006 was awarded the Silver Archer national prize as Person of the Year. In 2007, Teplukhin was named among the 20 Rising Stars of Wealth Management by Institutional Investor. He is a chevalier of the Tatischev Order for Service to the Homeland.