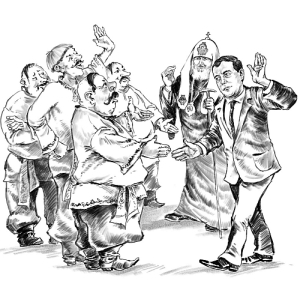 The economic crisis didn't have the effect on Russia that the West was anticipating. Instead of compliance, they've shown more aggression. Rather than being scattered around the world, Russia's now focused on strengthening its position as an independent centre of gravity. In other words, it's expanding its markets and political influence into adjacent territories.

The about turn of replacing World Trade Organisation membership with a customs union that surprised so many people, the new push to turn the Collective Security Treaty Organisation into a functioning military alliance, and moving closer to Turkey are all elements of one strategy. The new approach toward Ukraine proclaimed by President Dmitry Medvedev last week is in the same vein.

Many people think Russia is getting involved in the Ukrainian election campaign, which will go into full swing right after the holiday season winds down. And it's likely that's exactly what's happening. But Russia's hand will be different from the one it played in 2004. Openly betting on a particular candidate ended in such confusion five years ago that the Kremlin would have to be masochistic to try it again. Now Russia's position is formulated on a much broader scale. No matter who wins in January - and the Kremlin doesn't believe in the reincarnation of Viktor Yushchenko - the new president must immediately take into account the long list of framework conditions set forth by Moscow.

It seems that Medvedev's address has brought an end to the previous approach, under which the goal was to treat relations between Russia and Ukraine like those of any two "ordinary" foreign countries. In reality, that was never the case, but no senior political leaders were willing to say publicly that Kiev was for Moscow - or that Moscow was for Kiev - something more than simply an external partner.

The recent visit to Ukraine by the head of the Russian Orthodox Church showed that there's a new public figure in Russia whose political weight and diplomatic skills surpass those of the secular authorities. Patriarch Kirill combines tact and civility with a firmness of his ideological positions, and his address to worshippers calling for unity and reconciliation is a demonstration of the "soft", nonstate power that Moscow has long been criticised for lacking.

That impression only became stronger when, a day after Medvedev's address, the patriarch's press service published thankyou letters to the people he met in Ukraine, including Yushchenko. Kirill noted that "despite all of the difficulties, Ukraine is successfully consolidating its statehood". His letter to the president concludes: "May God's blessing be with the people of beautiful Ukraine, with its leaders and military, and with all of us."

At first glance, the patriarch's remarks sharply contrast with those of Medvedev, who said Ukrainian weapons were used to kill Russian peacekeepers in South Ossetia. In reality there's no contradiction, since the authors of the two addresses to the Ukrainian president are speaking from entirely different positions. For Medvedev, Yushchenko is an unpleasant - it's not being hidden anymore - counterpart; for Kirill, he's a member of the faith, who needs to be put back on the true path if he strays from it.

What they have in common is that both Russian leaders - spiritual and secular - are saying they intend to hold a dialogue with their neighbour outside the typical political channels. The patriarch addresses his congregation, which by definition should not be divided by citizenship or state loyalties. Medvedev appeals directly to the Ukrainians, letting them know that the conversation with their political elite has become unproductive. In fact, the symbolic meaning of not sending a new Russian ambassador to Kiev also ties into this desire to reduce official dialogue to a purely technical level.

In their nearly 18 years of independence, Ukraine and Russia still haven't found a stable form of coexistence. They've tried everything from imitating brotherhood and relying on corrupt schemes to petty alienation and indirect military and political confrontation. Yet their overlapping interests - from culture and history to economics and security - are extremely tangled. Passions are tearing through the cloth of all of these types of relations and sparking crises for all of Europe, as happened, for example, in January.

Both countries are in the process of nation-building within borders that they never before occupied. That determines an awful lot. And there's a temptation for Russia to make use of the still unsettled configuration of the post-Soviet space, particularly when it involves land with a disputed history. Additionally, Ukraine is trying to stake out a permanent claim as part of the non-Russian world, even as its internal political environment remains unstable. This psychological interdependence has made pragmatic ties impossible, at the very least for now.

The Russian authorities' attempts to build ties with Ukraine from below, making use of its resources there, is generally understandable since the country is lacking an accountable and consolidated elite. But this clever plan can only work if the Russian strategists accurately estimate Ukrainian society's sympathies toward Russia. It's no secret that the policy, maintained during Yushchenko's presidency, of a sharp break from Moscow and everything Russian has been unpopular with a portion - and likely not a small one - of the Ukrainian people. It's not clear, however, that those same people are therefore willing to forego their national sovereignty, which many of them have become used to over the years.

Of course, the Kremlin would most likely be satisfied if public opinion forced the Ukrainian authorities to move toward a policy of compromise on the most important issues for Moscow... security and energy. But by resorting to "Great Game" tactics, Russia should expect a similar response. It's easy for Kiev to turn the situation into the claim "our country's in danger", with all of the resulting internal and external consequences. Yushchenko is still to decide how to proceed. And that's when we'll know whether Russia's evaluation of the situation in Ukrainian society - and its wager on a direct appeal - was correct.