Dancing with Hitler on the edge of the abyss 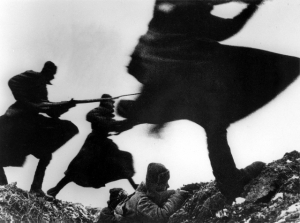 Seventy years ago, the world was falling into an abyss that would engulf between 50m and 70m lives. World War II dwarfed all previous wars, and raised questions not yet satisfactorily answered. What was the rationale behind the German-Soviet Treaty of Nonaggression? What did those who signed the pact hope for? We talked to American military historian and writer Albert Axell about these unresolved issues.
There is an abiding claim that if the Soviet-German nonagression agreement (the Molotov-Ribbentrop Pact) had not been signed in August 1939, the Second World War might never have happened and history could have taken quite a different course. Do you believe this to be true?

No, it is not. Hitler's timetable called for a war with Poland on September 1. Some of the facts are still little known or blurred, or were submerged during the Cold War. However, a year earlier, the Munich Pact, in which Britain and France in effect gave Czechoslovakia to Hitler on a silver platter, was a severe blow to Moscow. Hitler's war machine was strengthened by the takeover of the splendid Czech munitions industry. The following year the talks in Moscow on an Anglo-French-Soviet Mutual Defence Treaty broke down. The British and French were not serious about signing it. In fact, while these talks were in progress, the British government was secretly negotiating a deal with Hitler directed against Russia. Their secret instructions tell the story. Two examples: "...the delegation should use great discretion as to how far they disclose Anglo-French intentions to the Russians... the delegation should therefore go very slow with the conversations." Also: "Disclosure to the Russians of the details of any technical equipment in the first stage is impossible..."

At the time of the Munich talks, Vladimir Potemkin, deputy head of the Soviet Foreign Ministry, warned French Ambassador Robert Coulondre that the decisions at Munich would lead to the "partition" of Poland. Coulondre immediately understood what was meant. Hitler was determined to invade Poland and Russia would not stand idly by. The Second World War was around the corner. Stalin and his coterie agreed to the pact with Hitler because they were certain Hitler would invade Poland with or without a treaty with Moscow. Without such a treaty, Russia would gain nothing and might well be in terrible danger: The Kremlin expected Hitler to turn against Russia sooner or later. Meanwhile, as Molotov met with Ribbentrop, major hostilities between Russia and Japan were taking place in Mongolia. Hitler regarded Japan as a close ally.

Did Stalin have an alternative to signing the pact with Hitler, considering that the Soviet Union was not prepared for war against Germany, and that the Western powers were unwilling to unite with Russia?

Yes. Stalin wanted to sign a treaty of mutual help with Britain and France and invited Britain's Foreign Secretary, Lord Halifax, to come to Moscow to lead or help in the talks. Nearly every expert says that if Halifax had gone to Moscow, the negotiations would probably have succeeded. But he did not go.

At that time, Nazi Germany was much more powerful militarily than Russia. Russia needed at least two or three more years to catch up militarily and industrially. Stalin chose the path that was, it turned out, best for Russia, best for Britain, best for the United States and for the world.

How did Russia - and the world - gain? According to secret protocols added to the Molotov-Ribbentrop Pact, Poland would be divided between the two powers. This meant that in a future clash between Russia and Germany, the hostilities would be started 200 to 300 kilometres away from the Soviet border. Russia, in other words, had a buffer that in due course delayed the invasion of Soviet territory by Hitler's armies.

Few historians mention that Hitler met Stalin's first condition: signing an economic pact. Under this, Berlin granted Russia a two-year credit of 180m Reichsmarks for the purchase of German goods. The permission was obtained for Russian pilots and aircraft designers to visit no less than 200 German aircraft and military factories the year before Hitler invaded the USSR. The Russian mission to Berlin bought many late-model German planes and flew them to Moscow. Information obtained, on this and other occasions, proved invaluable. Hitler was said to have been furious about the sale of planes. The German general who approved the Russian requests committed suicide. By building up its military muscle and overcoming the Wehrmacht, the Soviets helped the US and Britain in their great victories over Hitler's armies in Western Europe.

Why did Britain and France show a lack of enthusiasm about signing a military agreement with Moscow in the summer of 1939, before the Molotov-Ribbentrop Pact? How could both London and Paris appear to have been so short-sighted?

There are three main reasons. First: an underlying purpose entertained by British leader Neville Chamberlain was to leave Hitler a free hand for expansion eastward into Russia. Nothing could have been more welcome to many British and French statesmen than to see Hitler's Germany in a death struggle with Russia's Bolsheviks. And if Japan joined in and all three fought to a standstill, no tears would be shed in London or Paris.

Third: in 1933, the Imperial Policy Group was formed, sponsored by a number of parliamentarians of the extreme Right. Soviet Communism was more repugnant to many conservatives than the ideology of Nazism. Opposition to a collective security pact for Europe and detestation of Russia were two of the things that united this group of diehards.

But the USSR was not the first state to sign an agreement with Hitler's Germany. Latvia and Estonia were the first. It is then even more surprising that, today, the Baltic states are such fierce accusers of the Soviet Union for its pact with Germany.

Everyone can appreciate the feelings that ordinary people in Latvia, Estonia and Lithuania had during World War Two. No nation likes to be conquered by another. Unfortunately, the three states are located in strategic positions on the Baltic coast, and therefore would automatically be involved in any armed conflict between Russia and Germany. There were both anti-fascists and anti-Communists in the Baltic states who bristled whether under the red flag or the swastika.

Stalin's ambassador in London, Maisky, reported that Churchill told him the following shortly before Hitler invaded Poland: "For the most part, Britain has no reasons to object to Soviet actions in the Baltic area."

Churchill told Maisky that he appreciated Russia's bid to become master on the eastern coast of the Baltic Sea, and was glad that Latvia, Lithuania and Estonia were incorporated into the USSR, rather than into the German Reich. Churchill, according to Maisky, said this was "historically normal".

Seventy years on, and the Soviet Union doesn't exist any more; the world has moved on. Why does mention of the Molotov-Ribbentrop Pact still provoke bitter debate in the new millennium? Why is it still such a hot topic?

Perhaps one reason is a psychological need to hide Western faults, especially during the fateful 1930s, and to exaggerate Russia's. It is easy to point a finger at Russia and not to fault the blindness of the British and French for the betrayal of Czechoslovakia at the Munich conference in September 1938.

British historian AJP Taylor is categorical: when Hitler sent a message to Stalin on August 20, 1939, agreeing to all Russian demands, his message "was a milestone in world history". Taylor adds: "It marked the moment when Soviet Russia returned to Europe as a great power. No European statesman had ever addressed Stalin directly before... Now Hitler recognised him as the ruler of a great state." Earlier, British Prime Minister Neville Chamberlain twice flew to Berlin to discuss vital questions with Hitler, but he refused to meet Stalin. Sir Winston Churchill was a statesman of a different order.

Sadly, the Cold War prevented the West from getting the full picture of the heavy sacrifices made by the Russian people in the common struggle against the Axis powers. General Eisenhower's son, John SD Eisenhower, a prominent military historian, speaking several years after the collapse of the Soviet Union, made a remark that may surprise millions of Americans and Europeans to this day. A Second World War veteran, Eisenhower said: "The Anglo-American invasion of north-west France, in June 1944, was not only assisted, it was even made possible, by the heavy sacrifices borne by Russia's soldiers..."

Today, it should be an obligation for the US and other Western (and Asian) democracies to join hands with Russia in eliminating the most pressing dangers to our present civilisation. To paraphrase Abraham Lincoln, united we can succeed, divided we can fail.

RN Dossier
American military historian Albert Axell is author of four books on WWII, three of them about the German-Soviet front. He has just completed a book on President Eisenhower's friendship with Russia's "Marshal of Victory", Georgi Zhukov.


Russians cannot see any parallels between Nazism and Stalinism

According to a survey by VTsIOM, the Russian Public Opinion Research Centre, 53pc of those polled were against a parliamentary assembly of the OSCE resolution in support of the initiative of the European parliament to declare August 23, the anniversary of the signing of the Molotov-Ribbentrop Pact, a day of remembrance for victims of Stalinism and Nazism. Only 11pc of respondents spoke in favour of the document. Most respondents felt the resolution had been adopted "to undermine Russia's authority in the world and diminish its contribution to the victory over fascism (59pc)". However, many analysts believe Russians have negative attitudes to the crimes of the Stalin regime. "Russians do not want to be deprived of the most considerable cause for pride over the previous hundreds of years - the victory in WWII," said Vladimir Petukhov, head of dynamics of mass consciousness at the Institute of Sociology.

Why Medvedev set up a commission against falsifying history
Alexander Chubaryan, director, General History Institute
Russians, and particularly World War II veterans, often protest against the modern tendency to whitewash those who collaborated with Nazis. The Nuremberg trials condemned collaboration as a crime against the state, and those criminals were hanged when the war ended. All Nazi symbols were subsequently prohibited in Germany. So, today, when people in Romania or Latvia march in the streets sporting swastikas on their sleeves, they flout international law, and our commission has a right to pass its judgment on such outrageous behaviour. It discredits our veterans.
Roy Medevdev, historian
This commision is simply a response to similar initiatives already in place in different parts of the world. I see it as a completely normal phenomenon.
National history commissions have existed in France and Germany (at least, after the War), the United States, China and Japan for some time.