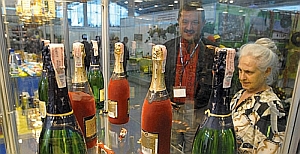 The Russian government hopes to ease the grip alcoholism has on the country. President Dmitry Medvedev has proposed sweeping changes to Russia's legislation, regulation, sale and advertisement of alcohol, but experts fear the government will be unwilling to take the steps necessary for effective reform.

At a forum in Sochi earlier this month, Medvedev announced: "Frankly speaking, alcoholism in our country has become a national tragedy...Each person, on average (including children), annually consumes 18 liters of pure alcohol. If you convert this into bottles of vodka, it torments the soul!"

Health and Social Development Minister Tatiana Golikova promised a government anti-alcohol program before the end of the year. Specific proposals included the banning of beer and light-alcohol advertisement on TV, increasing penalties for the sale of alcohol to minors, limiting the sale of hard liquors to supermarkets not located within the vicinity of schools and sports facilities and extending the same regulatory measures to beer and light-alcohols currently applied only to hard liquors.

The idea of tripling taxes on beer was also raised. A senior official confirmed that the government was considering raising the national drinking age from the current 18 years to 21, but emphasized that enforcement of the laws would remain at the regional level.

Yevgeny Yasin, Director of Moscow's Higher School of Economics, approved of all the initiatives, but emphasized that, in order to be effective, they would have to be strictly enforced.

He worried the government would not do this, fearing popular unrest. The country's last major anti-alcohol campaign, led by former Soviet president Mikhail Gorbachev, failed largely because of the ineffective and corrupt methods enforced through party organs, Yasin said.