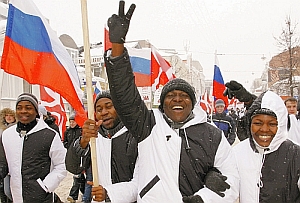 Russian reaction to President Barack Obama's visit seemed mixed, but he serves as inspiration to the country's little-known African-Russian community.
For Russians of African descent, President Barack Obama offers a potent symbol of triumph over the same challenges they themselves face in a country where dark-skinned people remain rare and often unwelcome.

Yelena Khanga is one of Russia's best-known black citizens. The popular host of a top-rated 1990s chat show about sex - "Pro Eto," (About That), she became one of the few black faces regularly seen on Russian television.

Khanga's grandparents came to the Soviet Union in the 1920s to escape the racism they had endured in the United States as a mixed-race couple. Today, Khanga says Obama's election to the American presidency has special meaning for her.

"He did what my grandmother and grandfather dreamed about in their day," Khanga says. "They couldn't even have dreamed that, one day, America would have a black president. The only dreams that they had-my grandmother was white, and my grandfather was black-was that Americans would someday allow mixed couples to live in peace, have children, and let the children have decent lives. That is what they dreamed about."

Khanga's grandfather, Oliver Golden, became a member of the Communist Party in the United States after he failed to find work as anything but a waiter despite having a college degree. He soon left for the Soviet Union with his Polish-American wife, Bertha Bialek, in one of the groups of black Americans actively encouraged by Bolshevik leaders to pull up stakes in their capitalist homeland and help build a new society in the U.S.S.R.

Golden traveled to Uzbekistan to work on cotton cultivation. He and his wife soon gave birth to a daughter named Lily, Khanga's mother.

Khanga says her grandparents worked hard to show Lily - who went on to marry Abdullah Khanga, a political leader from Zanzibar whom she met in Moscow - that she was free to achieve whatever she wanted.

"The Obama campaign said, `Yes we can.' My grandmother and grandfather said the same thing to my mother: `Yes, you can. You can do it,'" Khanga says. "And my mother was the best pupil in school, she graduated with a gold medal.... She was practically the first black person to study at MGU [Moscow State University] in the Soviet Union. She played tennis; it was the dream of my grandfather that she, a black girl, play tennis. She was the champion of Uzbekistan."

The most famous African-Russian is legendary poet Alexander Pushkin, who was the great-grandson of an African brought to St. Petersburg under Peter the Great in the early 18th century. During the Soviet era, African students were actively encouraged to travel to the Soviet Union for their educations, leading to a number of mixed marriages and African-Russian offspring.

But black skin remains extremely rare in Russia. One estimate says that there are between 40,000 and 70,000 Russians of full or mixed-African heritage.

That distinction has singled many black Russians out for treatment that they say swings between curiosity, at best, and open hostility, at worst.

Grigory Siyatinda, an actor at the Sovremennik Theater in Moscow, grew up as the only black man in his hometown of Tyumen in the 1970s. His experience was that of an object of fascination in an isolated Soviet society where foreigners, and especially black foreigners, were exotic.

"How to put it? It wasn't racism, what I experienced during my childhood in Tyumen," Siyatinda says. "I was the only black person in Tyumen-Tyumen is a Siberian city and there were no black-skinned people at all. ...That's why there was simply this heightened curiosity toward me. It was heightened so much at times that it crossed over the borders of tact."

Racism, long officially denied under the communist regime, is a reality in modern-day Russia, where nationalist groups and xenophobia are on the rise.

Russia's Sova center, which tracks issues related to race and ethnicity, reports that 97 people were killed in racist attacks in 2008. Statistically, Central Asian migrants have become the primary victims of attacks in recent years. But African-Russians and African students remain constant targets as well.

Still, Khanga-whose great-grandfather was a slave in Mississippi-says she believes the scourge of racism was far worse in the United States, where there were 4 million African slaves by the time slavery was abolished in 1865 and where it took another century before school segregation and other forms of racial discrimination were formally outlawed.

Khanga notes that there was a very small percentage of mixed-race and black people in the Soviet Union.

"I was part of the first generation...," Khanga says. "...I can be the first to tell you what kinds of problems we had. But, of course, you can't compare them to the kinds of things that happened in America."

Still, the few black Russians who have risen to prominence in their country have done so through sports or the entertainment world.

Khanga says she hopes that Obama's historic rise to become the first African-American president will open doors for blacks in Russia as well.

"I would like to see us have success in politics or science as well," she says.

Dubbed the "Volgograd Obama," Joachim Crima, who calls himself Vasily Ivanovich in Russian, is standing in district elections in south Russia's Volgograd Region.

"I was born in Africa, but I have lived in the district for 12 years and feel practically Russian," the watermelon seller said. "I have a son here and this is why I cannot be indifferent to the fate of the region."

"I want to make the lives of people, whom I consider my compatriots, better. I am ready to work from morning until evening to resolve their problems."

The newsru.com website said Crima was using the common Russian expression for working hard as his campaign slogan. Elections are due on October 11.